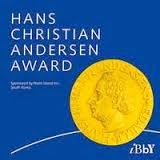 From the 58 candidates selected from the 33 national sections of IBBY, the shortlist for the Hans Christian Andersen Award 2014 have been selected! Six authors and six illustrators will now be considered for the most prestigious international award in children's literature.
Launched in 1958, the Hans Christian Andersen Award is given biennially bi the International Board on Books for Young People to both an author and an illustrator whose work in the field of childrens' literature has made a lasting contribution. To be honest, even to make it on to the longlist is a huge honour, given the sheer number of exceptional childrens' authors/illustrators working today.
The award will be announced on Monday, March 24th at the Bologna Book Fair.
The shortlisted authors are:
- Ted van Leishout from the Netherlands
- Houshang Moradi Kermani from Iran
- Mirjam Pressler from Germany
- Nohoko Uehashi from Japan
- Renate Welsh from Austria
- Jacqueline Woodson from the United States

And the illustrators are:
- Rotraut Susanne Berner from Germany
- John Burningham from the United Kingdom
- Eva Lindstrom from Sweden
- Roger Mello from Brazil
- Francois Place from France
- Oyvind Torseter from Norway

A ten member, multi-national panel from IBBY now have the difficult task of reviewing the selected author/illustrators works and making their selection. The best of luck to all the worthy candidates. I anxiously await their selection!
http://www.ibby.org/index.php?id=1315