Showing posts from May, 2012
Show all

I wanted to express my heartfelt congratulations to wonderful author and friend Paula Leyden. Today Paula picked up the Eilis Dillon Award for her beautiful novel 'The Butterfly Heart'. When I first read this novel, I was incredibly excited and moved by it. It has joined my favourite and must-read books. Congratulations, Paula! I am absolutely thrilled for you! xx http://thebutterflyheart.net/2012/05/28/cbi-eilis-dillon-award-2012/ (Once again, here's the link to my review of The Butterfly Heart on The Bookbag: http://www.thebookbag.co.uk/reviews/index.php?title=The_Butterfly_Heart_by_Paula_Leyden )
Post a Comment
Read more 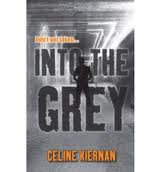 From Inis Magazine Blog and the pen (????) of Mr. David Maybury:   And here they are - the 2012 Children's Book of the Year Award winners! Nabbing the overall Children's Book of the Year Award - Celine Kiernan 's Into The Grey "An imaginative and empathetic supernatural thriller coalesces past and present to explore the complexities of fraternal love and the pain of loss." The Eilis Dillon Award (for best debut) goes to Paula Leyden for The Butterfly Heart! Judges Award for Fiction goes to our former Laureate Na nÓg - Siobhán Parkinson for Maitroisce Judges Award for Illustration goes to the inimitable Oliver Jeffers for Stuck And the Judge's Special Merit Award was picked up by Mark O'Sullivan for My Dad is Ten Years Old   Congratulations to all of those shortlisted, the judging panel for their difficult decisions, and to CBI for ensuring the future of the awards! Congratulations to you all!!!!
Post a Comment
Read more

CBI Book of the Year to be announced

After a fantastic CBI conference last weekend, Niamh Sharkey being named the second Laureate na n'Og... it's all been go, go, go this month! Today, I'm anxiously awaiting news on the CBI Book of the Year Awards 2012 (formerly the Bisto Awards). I won't know anything until later, but here's a reminder of the shortlist: GOOD LUCK EVERYBODY!!!!
Post a Comment
Read more

I just wanted to give a quick shout and alert you of my review of Ask Amy Green: Love and Other Drama-Ramas by Sarah Webb. This is the fourth book in the Ask Amy Green series, and the fifth will be out later this year. Here's the link to Inis Magazine , where you'll find it and reviews of other great books you won't want to miss. http://www.inismagazine.ie/reviews/book/amy-green-love-and-other-drama-ramas
Post a Comment
Read more 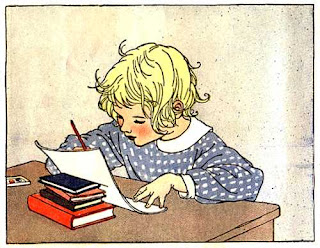 I spent part of this beautiful day at St. Nicholas Parochial School. It had been my great pleasure to judge a story writing competition of the efforts of the 3rd/4th class. Now that was a difficult task! Every one of the stories submitted were incredibly well written with memorable characters, excellent plots and incredible journeys. I had to read and reread and reread, before finally settling on the three winners. So congratulations to : 1st Prize: Isabel Smith for her very contemporary, dystopian style story , The War Has Begun 2nd Prize: Nathan McNeela for his exciting seafaring mystery, The Man and the Island 3rd Prize: Lucille Destarde for her story of an exciting dream-like journey; Last Monday and to all the rest, I just wish I could have given you all an award because the stories were all great! During my visit to the class to present the awards, I was treated to 3 lovely bits of music (two were sung by the entire class and one was performed by Isabel, a piece chosen to
Post a Comment
Read more

Now this is what I love seeing in the bookshop.... 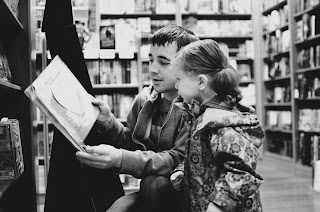 Busy Weekend... Places to go; people to see.. and events! 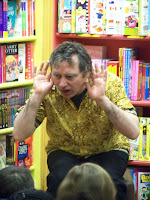 Yes, this is a busy weekend and it starts immediately. Personally, I'll be at work for the day, then I'm off to Dublin for the CBI conference on Saturday and Sunday. Expect a full report! But for those of you hanging out in Galway, there's still alot to do. First of all, today marks Fascination of Plants Day at the NUI Galway Art Gallery with the opening of a beautiful exhibition at 2pm. 'Our Fascinating Flora' is an exhibition of plant inspired art and photographs in celebration of the first ever Fascination of Plants Day... a must for art lovers, gardeners... and, as it turns out those among us who love storytelling. The marvellous Rab Fulton will be there between 11-12 noon, lending his storytelling talents to all and sundry, so do go along! At 3-4pm Dr. Maria Tuohy and members of her lab will recount the amazing adventures of Jack and the Beanstalk, and everything you want to know about amazing and wonderful beans! http://www.plantday12.eu/ As if that
Post a Comment
Read more

The Fault In Our Stars by John Green 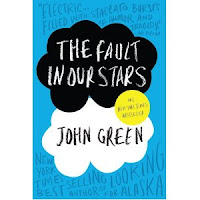 Just to let everyone know... The Fault In Our Stars by John Green is now available in paperback. My recommendation? Buy it; read it; read it again.... you get the picture. (My review on The Bookbag...) http://www.thebookbag.co.uk/reviews/index.php?title=The_Fault_in_Our_Stars_by_John_Green
Post a Comment
Read more 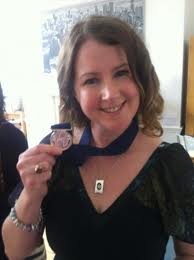 Here's the youtube video of Michael D. Higgins announcing  Niamh Sharkey as Ireland's second Laureate na n'Og. He tells some marvellous stories himself and talks about children, children's stories, the importance of libraries and children's literature and respecting the integrity of children as readers and as human beings. Oh!!! And his comments about children and actually handling books!!! Just delightful.What a marvellous introduction! Again, congratulations to Niamh! I'm looking forward to the next two years, because I'm sure it's going to be wonderful.
Post a Comment
Read more 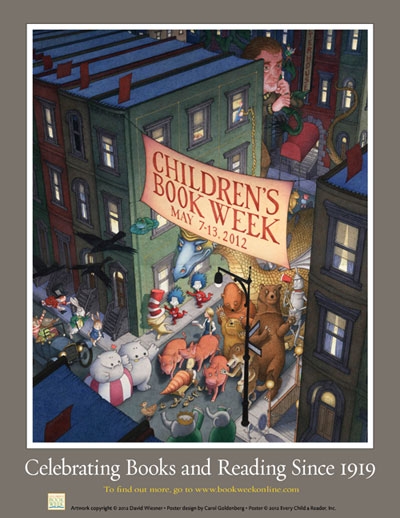 Obama Reads 'Where the Wild Things Are'

President Obama read Where the Wild Things Are during the annual White House Easter Egg hunt this year... getting the children to join in and be Wild Things. (Even Bo the dog joins in on the wild rumpus!)
Post a Comment
Read more

Maurice Sendak: June 10, 1928 - May 8, 2012 It was with great sorrow that I learned of the death of Maurice Sendak yesterday, and I think that can be said by a huge number of us who grew up with his books, whose children grew up with his books or any of us who are passionate about childrens' literature. I took it quite personally; as if I had lost a beloved, albeit crotchety and sometimes frightening, uncle or grandfather. It will be said over and over now that Sendak was one of the greats, and that is certainly more than true. He left behind a legacy of over 200 books. Sendak won all of the prestigious awards for children's books that can be won, I believe; the Caldecott Medal for Where the Wild Things Are in 1964, the Hans Christian Andersen Award for Illustration in 1970, the National Book Award in the picture books category for Outside Over There in 1982, the Laura Ingalls Wilder Medal in 1983, the National Medal of Arts in 1996 and the Astrid Lindgren Memorial aw
Post a Comment
Read more 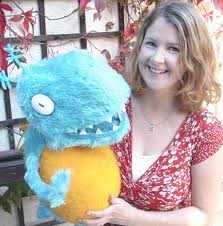 Big congratulations to Niamh Sharkey!!!! Earlier today, President Michael D. Higgins presented Niamh with her Laureate na n'Og medal, which marks the beginning of her two year term as Irelands' second Laureate na n'Og. " It is a great honor to be chosen as the next Laureate na nOg. I am a picture book maker so my focus as Laureate will certainly be visual as well as literary. I am going to get to do even more of what I love most - promoting quality children's literature and encouraging children to read, write and draw.  I have lots of ideas that I hope will inspire creativity in children of all ages. I'm very excited and can't wait to get started" Niamh Sharkey, May 8th 2012 Niamh follows in the footsteps of the wonderful Siobhan Parkinson. Congratulations, Niamh!!! http://www.childrenslaureate.ie/
Post a Comment
Read more 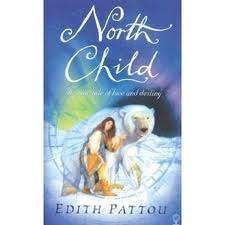 My review of one of my all time favourite books, North Child by Edith Pattou, is up on The Bookbag now! This eloquent retelling of 'East of the Sun, West of the Moon' is truly marvellous and one I return to again and again. (Note to my friends and family in the United States, in that part of the world, this book is published as 'East' ) It's one of those moments in children's literature when it all seems to be about fairy tales for me. But then, I believe that we don't read enough fairy tales. Fairy tales were never meant to be only for small children. They are the heart and the soul of who we are as human beings, and need to be revisited throughout our lives. Or as C. S. Lewis put it in his wonderful writing 'The Worlds' Last Night and other essays'; “Some day you will be old enough to start reading fairy tales again.” http://www.thebookbag.co.uk/reviews/index.php?title=North_Child_by_Edith_Pattou
1 comment
Read more

The Chronicles of Harris Burdick 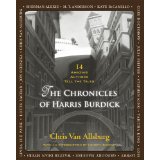 Check out my review ( on the 'What ARE You Reading page ) of this intriguing, marvellous collection by Chris Van Allsburg. And what a great trailer!
Post a Comment
Read more

A big congratulations to the 2012 Hans Christian Andersen Illustrator Award winner...Peter Sis! Peter Sis has created some of the most magical, exquisite, integral illustrations ever seen in the in the world of picture books. If you don't know his work, may I suggest Madelenka or The Tree of Life ... pure magic!
Post a Comment
Read more

Another item in the world of children's literature happening at the end of May.... the winner of the CBI Children's Book of the Year 2012 (formerly the Bisto awards) will be announced on 28th of May. This award is now in it's 22nd year! The shortlist was announced in March, the school shadowing scheme is churning away in schools throughout the country to select the Children's Choice award, and the panel of judges that worked so diligently to whittle down an impressive and expansive longlist to and impressive and concise shortlist is now working away even more diligently to hone in on the winners. In case you missed the shortlist previously, here's a brief recap: A GREYHOUND OF A GIRL by Roddy Doyle BRUISED by Siobhán Parkinson INTO THE GREY by Celine Kiernan MAITRÍÓISCE by Siobhán Parkinson MY DAD IS TEN YEARS OLD: AND IT’S PURE WEIRD by Mark O’Sullivan Ó CHRANN GO CRANN le Caitríona Hastings agus Andrew Whitson (illus.) STUCK by Oliver Jeffers THE BUTT
Post a Comment
Read more 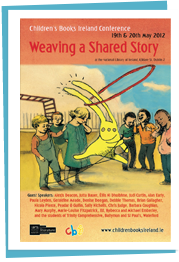 Hello... just a moment to wish you all a Happy May! There is so much happening now... so much to look forward to.... so many new books! First of all, I'm very excited about this years Children's Books Ireland conference, happening the 19th and 20th of May. The theme of this years' conference is 'Weaving A Shared Story' ... a what a shared story it will be. We have Alexis Deacon, Eilis ni Dhuibhne, Chris Judge, Paula Leyden, Nicola Pierce, Judi Curtin.... and one of the features of the Sunday sessions will be the Emberly family, sharing their enthusiasm, inspiration and knowledge of picture books. Ed Emberly and daughter, Rebecca will be making the trip from the States; while Michael Emberly and his wife, the wonderful Marie-Louise Fitzpatrick will be joining the conference from a little closer to home. There will be so much going on at the conference. If you love childrens' books... you really should be there, if only for one of the days! Here's the co
Post a Comment
Read more
More posts