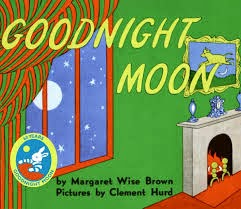 I've just found two very important bits of news on two of (my very favourite) most beloved picture books... well one picture book and one picture book author.
First of all, Margaret Wise Brown, the author of the wonderful, classic Goodnight Moon, passed away in 1952. Sterling Books in the United States is now preparing to publish Goodnight Songs, a collection of 12 previously unpublished lullaby poems by Brown. These were discovered in a trunk in her sisters' barn. These poems will be illustrated by 12 different artists! The poems were written while Brown was on a tour in France during the last year of her life. She had been under contract at the time to create songs for a new childrens' record label.
Kirkus reviews called the collection a "treasure trove" and said:
"Brown's intent was to capture the spirit of a child's world in her songs as she had done with her stories … the simple rhymes have Brown's trademark charm," said the book review magazine. "Children will enjoy the whimsical scenes, and adult mavens of children's literature will appreciate and delight in the background of the discovery."
Such excitement!
http://www.theguardian.com/books/2014/feb/28/margaret-wise-brown-new-lullaby-poems-goodnight-songs

And for the second bit of news.... tomorrow, March 20th is Very Hungry Caterpillar Day! So be sure to get out your much-loved copy and share it with your little people, or re-read it to yourself! And, if you've ever wanted to hear Eric Carle read The Very Hungry Caterpillar himself, you're in luck! Here's the link:
https://www.youtube.com/watch?v=vkYmvxP0AJI&feature=youtu.be