Showing posts from December, 2015
Show all

Get Ready to Track Santa! 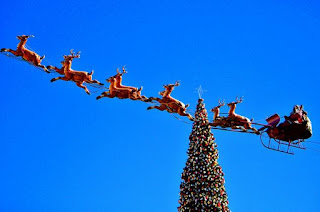 Each year at this time, the North American Aerospace Defense Command (NORAD) runs a Christmas-themed programme on it's special website that will track Santa on his journey from the North Pole around the world as he delivers presents! This began in 1955 when a Sears department store ran an ad in the paper with a telephone number that children could ring to talk to Santa. However, the phone number was misprinted, and instead Colorado Springs Continental Air Defense Command (CONAD) was inundated with calls. The commander in charge on that Christmas Eve instructed his staff to give each child the current location for Santa Claus. And so, a modern tradition began. NORAD took over from CONAD in 1958, handling all the calls and with the advent of the World Wide Web, a special site was set up that allows you all to follow Santas' travels on Christmas Eve. In the meantime, you can go on the site where you can explore the North Pole, find interesting facts and play games. The countdow
Post a Comment
Read more

As you might imagine, I am a HUGE believer in giving books as gifts. The  Four Gift Rule... has always been a mainstay in my life. But choosing those gifts takes time and thought, and frequently a little advice. While I love giving Christmas (or seasonal) themed books is always a delight, they do tend to have a limited application. January 1st rolls around and these books tend to get put away for the rest of the year. Nothing wrong with that, it's just that you probably want to give something that 'lasts' longer; lasts year-long. Robert Dunbar gave a wonderful listing in yesterdays' Irish Times; the best of the best from the past year. Other reviewers, authors and childrens' literate enthusiasts have also been giving their thoughts on the matter (all excellent, I have to say), so I thought, why not Fallen Star Stories? Below is a glance at my favourite books throughout the year that you might wish to consider. ENJOY! For the little ones (or all the family to
Post a Comment
Read more

Each year at this time, Iceland celebrates the winter season with an unusual and most excellent literary tradition, Jolabokaflod (which translates as the "Christmas Book Flood".) In Iceland, the very best Christmas gift to give and receive is a book. This has been the most sought after present for decades. Kristjan B. Jonasson, president of the Iceland Publishers Association explains; "The culture of giving books as presents is very deeply rooted in how families perceive Christmas as a holiday. Normally, we give the presents on the night of the 24th and people spend the night reading. In many ways, it's the backbone of the publishing sector here in Iceland." With a strong literary tradition that is centuries old, Iceland publishes more books per capita than any other country worldwide, with 5 books published per 1000 people. A catalog of the book titles on offer is sent out to every household. The majority of books are sold from late September through ea
1 comment
Read more
More posts