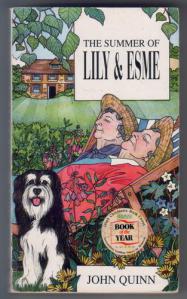 This year marks the anniversary of the publication of an extraordinary book. In 1991, Poolbeg published The Summer of Lily & Esme by John Quinn and in the 25 years since, it has never been out of print.
The Summer of Lily & Esme tells a quiet story, filled with compassion, friendship, memory and heart. It is the story of Alan, an 11-year-old boy who has moved from the city into a house in the countryside; in the middle of nowhere.The house is old and extremely large and immaculate; and there is a locked, boarded over attic room that is said to be haunted by the ghost of a young boy who died tragically. Alan is not too pleased with this move and becomes even less thrilled when he discovers his closest neighbours, in fact his only neighbours, are a pair of elderly sisters, Esme and Lily, who seem to be suffering from dementia.  When Alan falls down a hill of brambles and weeds, the sisters, who believe they themselves to be children, mistake Alan for their childhood friend, Albert. Albert sits at the centre of a mystery that occurred just a few short months after Lily and Esmes' 11th birthday, and now....according to them, he has arrived back. Alan and his new friend, Lisa who has arrived up from Wexford for the summer, set about discovering what happened to Albert, and, by extension, the sisters.
The summary I give hear seems too trite to do justice to how exceptional a story is told here. First of all, it is dealing with a concept that is difficult for children ages 9 to 12 to truly grasp with full understanding and impact. And yet, they will. In it's own reserved and thoughtful way, it is compelling; fascinating. The language is simple, clear and yet extremely eloquent. It casts a spell that allows the reader to see every bit of the journey. I didn't need to want to visit the house, meet the old ladies, see the countryside...I was there. It also expresses the deep interest, for lack of a better word, that the young and the old have with one another...a connection of sorts that is both curious and important. .
Upon finishing The Summer of Lily & Esme for the first time, I found myself sitting there with tears running down my face...and then I read it again.  I wish I had this book when I was young. Sadly, I only found it as an adult. But that hasn't lessened the impact it has. It is both memorable; the kind of book you will keep with you always.....the kind of book that will inspire you to think more, be more conscious of who and what is around you. It is unbelievably honest and forthright. It will make you think and feel more deeply. And it will move you.
Congratulations, John Quinn, for having written such a book. And thank you. It is certainly a gift. May it stay in print for at least another 25 years.