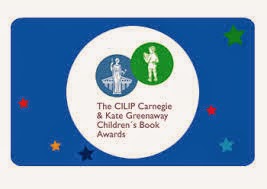 The shortlists for awards in childrens' literature are now arriving en mass! Yesterday, the announcement was made for the CILIP Carnegie and Kate Greenaway Medals. These are the oldest childrens' book awards in the UK. Whoever receives these honours will join the ranks of such lauded authors and illustrators as CS Lewis, Arthur Ransome, Noel Streatfeild, Phillippa Pearce and in more recent awards, Patrick Ness, Siobhan Dowd and Sally Gardner.

The CILIP Carnegie Medal is given annually to one outstanding new book for children or young adults. It is the UK's most prestigious award for childrens' writing. The shortlist is:
-All The Truth That's in Me by Julie Berry (Templar Publishing)
-The Bunker Diary by Kevin Brooks (Puffin)
-The Child's Elephant by Rachel Campbell-Johnston (David Fickling Books)
-Ghost Hawk by Susan Cooper (Bodley Head)
-Blood Family by Anne Fine (Double Day)
-Rooftoppers by Katherine Rundell (Faber & Faber)
-Liar & Spy by Rebecca Stead (Anderson Press)
-The Wall by Willian Sutcliffe (Bloomsbury)

The winners will be announced on Monday, June 23rd.
http://www.carnegiegreenaway.org.uk/home/index.php