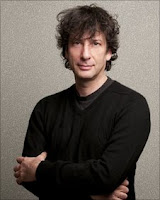 Upon receiving the CILIP/Carnegie Medal for 'The Graveyard Book', Neil Gaiman has now used this as a platform for (among other prevalent issues) speaking out in support of library funding. Gaiman stated emphatically that closing libraries as a means to reduce budget expeditures would be a terrible mistake. Gaiman believes that in an 'age of too much information' that libraries and librarians are more important than ever. There is an expedient view that, with the prevalence of the internet, libraries are quickly becoming outdated and are not as urgent a need in the lives of children (and adults) as they were even a few years ago. This notion that everyone has access to the internet and children aren't interested in books anymore has allowed governments, bot local and national, to scan over their expenses and say, 'Oh, libraries...we can cut them.' Not so, says Gaiman. He calls this notion 'stealing from the future' and likens turning children lose on the internet to receive information about the world they live in to ' setting a child free in a jungle and expecting them safely to find things to eat.'
Oh...and by the way, he's also written an episode of Dr. Who for 2011! That should really rock!!
Absolutely brilliant, Mr. Gaiman!