The Season of the Witch

- October 25, 2018
Here we are...the 25th of October. We all know what that means. In just a few days numerous little ghosts, ghouls and monsters will be knocking on the door demanding 'Trick or Treat'. And the witches! Oh the glorious witches! (I saw a few walking past earlier in a school Halloween Parade.)
In the book world, witches are always popular. We love a good witch story...something spooky that hints of magic and mischief and sometimes, sheer terror. Particularly this year (and the previous as well) witches and books about hauntings have come to the fore. So, for this special time of year, LB Koala and I thought we'd share a few of my very favourite witchy/ghosty books (MG and YA) for you all to enjoy while the nights are darkening and autumn is casting its' magical spell on us all. 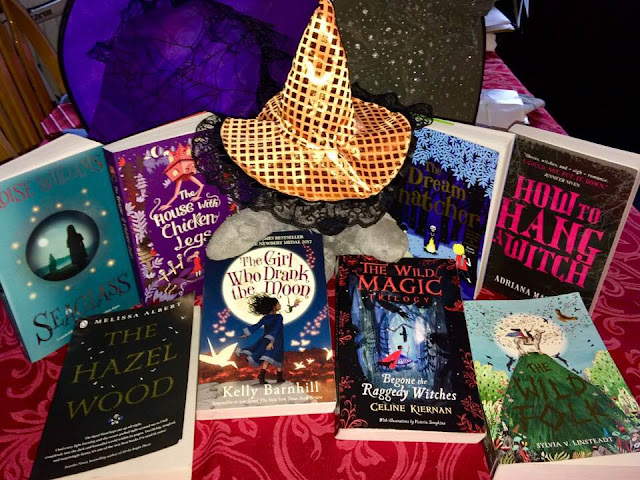 The Girl Who Drank the Moon by Kelly Barnhill (out in 2017) is a wonderfully magical story about a young girl, abandoned in the woods and raised by a kindly, elderly witch. Her guardian feeds her on starlight. One night she is fed on moonlight by mistake, accidentlt filling an ordinary girl with extraordinary magic.
The Dreamsnatcher by Abi Elphinstone (2015) is bold, frightening and adventurous. When Moll wakes one night in the forest, its' the same nightmare again. The sound of drums and rattles; a ghostly, skeletal face. The Dreamsnatcher is coming to seal her fate.
Begone the Raggedy Witches (The Wild Magic Trilogy) by Celine Kiernan; on the night Auntie dies, the Raggedy Witches come for Mups' mam and they will stop at nothing to get her. When they kidnap her father, Mam and Mup cross the border into the Witches Borough to rescue him. But Mam changes on this side of the border and Mup is afraid that nothing will ever be the same again. (The best witch book!)
The House With Chicken Legs by Sophie Anderson; Based loosely on Eastern European fairytales; Marinka dreams of a normal life in a normal town, in a normal house that does not suddenly run off on its' chicken legs to unfamiliar locations. But Marinkas' grandmother is Baba Yaga, who guides spirits from this world to the next and the house goes wherever she is most needed. Marinka longs to break away from her grandmothers' life...but the house has other ideas.
The Wild Folk by Sylvia V Linsteadt; Comfrey, a girl from the wild country with a driving curiosity about the Wild Folk and Tin, an orphaned city boy with a passion for invention are both visited by young hares one night. The hares were sent to them by the Greentwins and their task is to guide the two children on a mission to save the Wild Folk and their beautiful island kingdom of Farallone. Much magic, adventure and danger...beautiful.
Seaglass by Eloise Williams; in the Welsh countryside, in a ruined cottage rumoured to be the site of a witches house, it turns out there is no witch, but a young, restless ghost seeking justice for herself and her mother. And Larks' family is at the heart of it all. A chilling contemporary ghost story about friendship, family and learning to deal with emotions. Extraordinary tale!
How To Hang A Witch by Adriana Mather; Sam's father is in hospital, her step-mother and she have just returned to the old family house in Salem, Massachusetts only to find that the trials of high school are just like the old Witch Hunts...especially if you are part of the original descendants and an old family curse is rearing its head. (YA)

The Hazel Wood by Melissa Albert; dark, chilling fairytales invade our contemporary world where 17 year-old Alice must travel to the Hinterland to rescue her mother and free them both from the curse of bad luck that follows them everywhere they go. But Alice finds she may just get trapped in her own story. (definitely YA) SSoooo good it's delicious! But it is the stuff of nightmares.
The Price Guide to the Occult by Leslye Walton; Nor Blackburn is descendant from a long line of witches on Anathema Island, each having had their own power; their own speciality. Nor wants to live an ordinary, unremarkable life. But when her estranged, dangerous mother makes a reappearance, that may just be impossible. Gripping, magical and totally absorbing. (YA)