- August 03, 2013
Well, August is upon us now, and we've just a month left before we start thinking about busier days. With back to school thoughts looming large, don't forget to relax a bit more; celebrate those great summer days a bit longer... and don't forget to read whatever you want! I thought I'd add some my favourite Irish published and authored (?) books to the list. Again, some are old, some are new, but all are great summer reads.

THE SUMMER OF LILY AND ESME
author: John Quinn
Alan has lived all of his life in Dublin. But this summer, he and his family have moved to the country...which doesn't seem very promising to him. And when he discovers that his next door neighbors are two little, very old ladies, his mood is not much improved. When Lily and Esme start calling him Albert and Alan discovers a locked room on the top floor of his house and the story of a young boy who died tragically, he begins to worry. But Alan is determined to solve this mystery. With new friend Lisa (a young girl who lives nearby) baking him up, Alan discovers a true story of a summer many, many years ago and gives two little old ladies their most heart-felt dream. A wonderful story of friendship and loss is woven around inter-generational relationship. First published in 1991, this book still reads as warm, funny and thought-provoking. One to keep and read over and over.

CHOP-CHOP MADCAP
author: Juliette Saumande
illustrator: Sadie Cramer
Madgie Cappock, a.k.a. Mad Cap, is a chocolate eating tomboy with a brilliant idea....she opens her own detective agency, Rent-A-Hero and is soon dragging her faithful friend Norbert Soup along while solving a spate of mysteries; a missing butcher, secret passages....even her brother's secret girlfriend! But things don't always go quite to plan. Hilarious misadventures of a destined-to-be-favourite super-hero! The book is peppered throughout with lively, evocative illustrations by Sadie Cramer. Fab....just fab!

THE DEMON NOTEBOOK and (new!) THE BROKEN SPELL
author: Erika McGann
Grace and her four very best friends are failed witches. They have a notebook full of rubbish spells that don't work no matter how hard  they try. But one night, they accidentally-on-purpose unlock a portal into another realm, and the notebook develops ideas of it's own. The spells begin to work, one after another and Grace and co. have to take control and stop that last one from happening.... before someone gets hurt. But do the girls have enough witchy skill and courage to prevent a tragedy?
In the second; during summer holidays, the girls are being trained to be real witches. They are keen to take on some practical magic and work with real spells.... but their tutors have other ideas. Instead, they spend their summer steeped in books and studying weeds. But as school starts, a new, glamorous, exciting teacher appears and wants to teach them the real use of magic. Of course, this leads to arguments among the teachers. The girls find themselves trying to fix the conflict magically, but end up bouncing back and forth in time.... the magic is out of control again!
What fun and funny reads with real drama! I really hope Erika will continue this series.

THE NIGHTMARE CLUB series
author:Annie Graves (with some help by a frightening host of Irish authors)
Who doesn't like creepy (and funny!!!) tales to be read in the dark of night....or on warm, sunny summer days for that matter. Annie Graves is 12 years old with no intention of ever growing up. She lives somewhere in the Glasnevin area of Dublin. She's an orphan and doesn't have any need to go to school. But she does have friends (well, sort of) that come around to her house and tell each other the scariest, creepiest and funniest stories they can think of during their meetings of the Nightmare Club. She has written 7 books so far, none of which is her first. I haven't met a child yet (or many parents for that matter) who don't love the Nightmare Club books. My favourite?... oh, I don't know.... maybe The Wolfling, or The Guinea Pig Killer...or perhaps.......
http://www.thenightmareclub.com/

SPIRIT OF THE TITANIC
author: Nicola Pierce
This is Samuel Scott's story. Fifteen-year old Sam had a job in the construction of the Titanic, but a tragic accident sees him plummet to his death as the first casualty of the famous ship. Now, his spirit wanders through the Titanic on her maiden and final voyage. Based on the imagined life of a real person, this book is moving; it has depth and substance and takes you along with all the passengers and crew. A thrilling, exciting and dramatic read.... this is truly one of my favourites! (See my review on this blog for more information.) 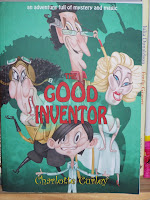 THE GOOD INVENTOR
author: Charlotte Curley
Recently orphaned Charlie has traveled from New York to live in the Connemara countryside with his Uncle Theodore, a professor and inventor of true genius... even if he is a bit eccentric. Uncle Ted has no idea how to raise a child, so he creates a marvellous 'secret invention' to help him out. On top of everything else, Charlie has a unique inheritance; the power of the Druids! And the magic and freedom of Connemara are exactly what is needed to release that power. But a deep and ancient evil is watching Charlie and has been waiting...plotting....contriving....

ARTEMIS FOWL (series)
author: Eoin Colfer
What more is there to say.... Teenage criminal mastermind Artemis Fowl has a missing father, a mother in a nervous breakdown and a vast family fortune to preserve. So what will he do? Of course, he begins by kidnapping a fairy. And that makes him Public Enemy Number One. And that's only the beginning. Eight books...all fantastic! 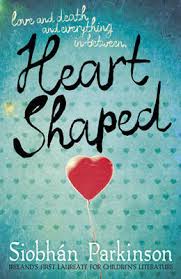 HEART-SHAPED
author :Siobhan Parkinson
When her boyfriend, Jonno disappears and Annie is worried about his safety, she feels so alone. She clings desperately to her dad, but he can't help fill in the gaps in Annie's life. No one can help her. She must look into her past; she must discover who her mother was and what happened to her; she must uncover, on her own, what has happened in her own life and come to some sort of understanding about who and why she is. This is a companion book to Parkinson's brilliant and moving Bruised, but can be read without reading Bruised first. (You will, however, want to go back and read Bruised... you won't be able to help yourself.) Stirring, moving and compassionate; this is a great teen read from one of the best Irish authors today. Her back catalog of titles is truly impressive, and each one is a gem. (seriously.... not a bad book in the bunch.)

I'm at risk of typing for hours, now... so many great authors... so many fantastic Irish reads... what are your favourites/