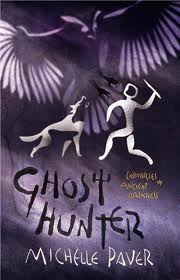 Like it says on the tin....Michelle Paver has won the Guardian Children's Fiction Prize 2010 for "Ghost Hunter", the brilliant culmination of her Chronicles of Ancient Darkness series that began six books ago with "Wolf Brother".
Julia Eccleshare, chairman of the judging panel said,
"It's relatively rare for a book late in a series to win a major prize, but the Chronicles of Ancient Darkness is such a towering achievement, as a whole as well as in terms of the individual books, that it was our unanimous choice."
From the beginning of this series, I began recommending it to just about everybody. Consistant in quality of writing, character development and inthe flow and intrique of the plotline, the Chronicles of Ancient Darkness, as a series is absolutely magnificent.
Congratulations to Michelle Paver!!!! Couldn't be more pleased.
http://www.guardian.co.uk/books/2010/oct/08/michelle-paver-guardian-children-fiction-prize
Guardian Children's Fiction Prize