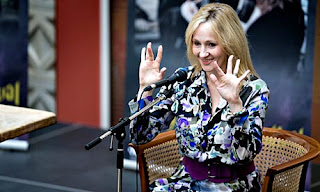 Announced on October 20, JK Rowling has become the first winner of a new Danish award, the Hans Christian Andersen Literature Award. The prize, which is distinct from the much coveted Hans Christian Andersen medal awarded to David Almond earlier this year, is given to a writer whose work can be compared to that of Andersen in that it's characters and themes speak to enduring appeal. Speaking at the awards ceremony in Odense, Andersen's birthplace, Rowling said she was "humbled and deeply honoured" to become the first winner of the prize.
"Hans Christian Andersen is a writer I revere, because his work was of that rare order that seems to transcend authorship..."
Rowling went on to praise Andersen's "indestructible, eternal characters."
Many congratulations, Ms. Rowling!
http://daphne.blogs.com/books/2010/10/jk-rowling-wins-hans-christian-andersen-literature-award-books-guardiancouk.html
JK Rowling