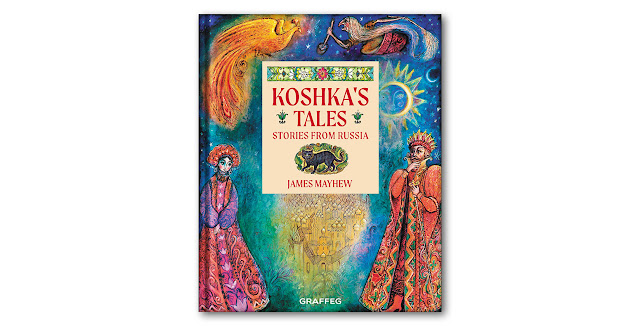 Welcome back to magical tales of Old Russia; of a time when Russia was divided into many parts called tsardoms, each ruled by a Tsar, filled with mystery and magic; stories and folklore. Some you may know; some may bear a striking resemblance of other tales you've heard; but all are here to fire your dreams and imagination and take you away to another time and place.
It is with the utmost delight that I share with you the news: Koshka's Tales: Stories from Russia, after being out of print for over 20 years, has made its' wonderful way back to our shelves thanks to Graffeg Ltd. And it is just as perfect and wondrous as it was the first time round.

KOSHKA'S TALES: Stories From Russia
author/illustrator: James Mayhew
Graffeg Ltd (24 October 2019)
ISBN: 9781913134457
Tsar Saltan Saltanovich ruled a fine tsardom. His only sorrow was that he had no tsaritsa to sit beside him. So he traveled across the land in search of a woman worthy enough to wear the crown. Coming upon the last cottage in his tsardom, he found there three orphaned sisters, the youngest of which, Militrissa, he chose to be his wife. She would give him 7 fine, fair-haired sons. But her sisters were filled with anger and jealousy, even though they were treated with the utmost care and love by Militrissa. As the children were born, the two sisters stole them away, replacing them with puppies, kittens and a loaf of bread, having made a pact with the Baba Yaga. All but one son was stolen. When he was born, Militrissa hid him in up her sleeve. And when Tsar Saltan, brokenhearted and enraged by the loss of all his sons (or so he thought), cast Militrissa in a ask and had her thrown into the sea, the baby boy, Guidon was with her the whole time. The cask floated away, finally landing on the Island Buyan, where Militrissa and Guidon found a very unusual, storytelling cat....
And so it begins. 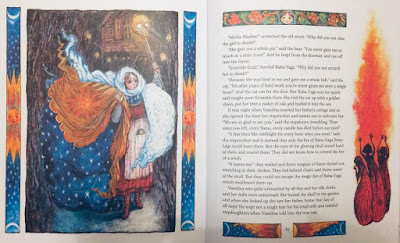 First published in 1993, these stories are lovingly retold by James Mayhew and are filled with the drama and beauty of original folktales. Evocative of an enchanted landscape, a far cry from the world we live in, they whisk us away on a journey of dreams. The five stories recounted in these pages weave a spell of enchantment as we read the words. We can hear the voices, taste the salt of the sea, see the wicked Baba Yaga as she sails through the skies in her pestle and mortar as each tale easily flows into the next and creates a vivid picture of the lives and the beings living through them.

It is easy to understand why these stories had so much cultural impact; leading on to inspire symphonies and ballets (Tchaikovsky, Stravinsky, Rimsky-Korsakov) and fueling the fires of generations and novelists, even unto today. (The wonderful books of Sophie Anderson; The House With Chicken Legs and The Girl Who Speaks Bear; owe much to stories such as these, told to her as a young girl...and must be read!) Mayhew has filled every page with exquisite illustrations that perfectly illuminate the storytelling and create within the reader a compulsion to continue. The rich colours and sparkling detail echo the expressive language to conjure the magic of this glorious land. This is truly a book to be cherished and read and shared over and over. Absolutely spell-binding.

Happy Re-Publication Day to this book of wonder. And thank you Graffeg, for making certain it found its' way back to us.