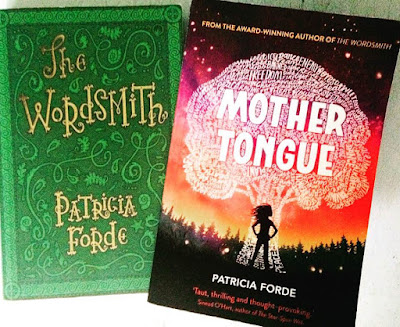 In May 2015, we were introduced to a world after "the Melting", an extreme environmental disaster that saw little land left, and few people.We were introduced to the world of Ark, a ruthless leader named John Noa and a young heroine called Letta...and it was completely mesmerising; a book I simply couldn't put down and placed in the hands of more readers than I can remember. The Wordsmith by Patricia Forde (entitled The List in the US.) Over the last four years, while I have returned to The Wordsmith time and again, I have longed to return to that world; to discover what happened to Letta, to all of Ark in the time that passed. That longing has now been satisfied. 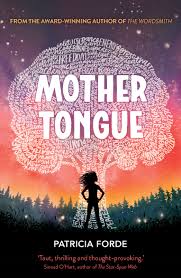 MOTHER TONGUE
author: Patricia Forde
Little Island (12 September 2019)
ISBN: 9781912417278
Since the death of its' leader in the battle of the water tower a year earlier, Ark is now under the grip of a new dictator, even more extreme, more ruthless than John Noa. Amelia is determined to carry out the wishes of her dead partner, Noa...but in a more absolute fashion. Babies are disappearing from their families, taken by the Gavvers, enforcers of the law of Ark for an unknown purpose, to an unknown location. And the people are living in abject fear. Letta is now an enemy of the state; part of the resistance movement, the Creators living and working in secret to overturn the horrific events that have been building since the Melting. She continues with her work as the Wordsmith, collecting words and language for the people. But her job now takes on an added, very dangerous aspect as Letta is now running a covert Hedge School, teaching the children the words that are missing from the state-enforced language of List. Language is a weapon. Letta is determined to teach the children how to use it. But when she discovers that babies are being stolen from their homes, Letta takes on another task; a task that places her in more peril as she uncovers a heart-breaking, sinister plot and brings her face to face with a dead woman. But Letta must find out where the babies are being hidden...and why.
Mother Tongue is a glorious, chilling, powerful work of speculative fiction that takes the reader on a journey of heart and mind, of the effects of environmental disaster and the dangers of absolute power. Complex ideas about language and society are expressed with a rhythm and eloquence that holds the reader in the storys' tightly woven grasp and creates a world that is frighteningly tangible. It makes you feel as if in a dream from which you cannot wake. The book moves with pitch-perfect pacing that causes a feeling of flowing through the plot; moving through the landscape with its' hills, fields and forests as if you have been carefully placed in every location by the words themselves. The characters are incisive; multi-layered and lending differing and genuine voices and concerns to the tale. Letta herself is simply magnificent; well-rounded, filled with conflict and determination, believable and heroic. She is an inspiration. An ode to the urgency of language (which features as a hero in and of itself), freedom of expression, response and responsibility, the effect is a book that you will keep inside you long after you've put it down. And I would argue that this is not simply a book for young people; everyone should read Mother Tongue. Thought-provoking and emotion-stirring, purposeful, exciting and haunting.
(I need to add that Mother Tongue is not the sequel to The Wordsmith, per se. Rather it is a follow-up; a companion book and can be read as a stand-alone. So if you haven't read The Wordsmith, you'll still get just as much out of Mother Tongue.
But if you haven't read The Wordsmith, I really think you should.
Also, there will be an upcoming Blog Tour for Mother Tongue early in October...watch this space!)