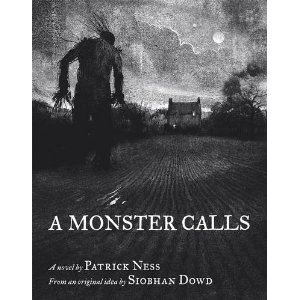 Just out now.... A Monster Calls by Patrick Ness is based on an idea left behind by the late Siobhan Dowd. Ness said he felt as if he'd been given a baton and told to run with it, and run he did. This novel is absolutely beautiful. It's frightening, uplifting, gripping and strangely comforting. The one thing Ness said he didn't want to do was to try and copy Dowd's voice; that would do her a great disservice and the book a great disservice. What his efforts have produced is incredible. Those of you who have read Dowd's work will be able to recognise her voice within it, but it also reads a great deal like Ness' voice in the highly successful 'Chaos Walking' series... and then again, it sounds like neither one. 'A Monster Calls' combines the voices of Dowd and Ness, and then seemingly absorbs/discards them to create unique, strange and beautiful voice of it's own. It is rare that such a perfect novel comes along. Truly moving and stunning!
It is after midnight when the Monster calls. Night after night since his mother started her treatments, Conor has had the same reoccurring nightmare, and now, a monster has come to tell him stories. Not a monster from Conor's nightmare, it is something ancient and timeless, something wild and something free. And in exchange for the stories it tells Conor, it must extract a price that is the most dangerous thing of all... the truth.