- May 29, 2011
In this article, from the Irish Times on 26th May, well done to Jerry Grogan! As principal of Donaghmede’s Holy Trinity Senior National School, he made a critical decision that growing a kitchen garden was the best way for his students to learn the skills of growing and harvesting food.
“As a teacher, I was noticing that more and more of the children I was meeting had no connection with nature – nothing at all. Instead, they were spending most of their time indoors. It was quite shocking,” he explains.
You don't need to be a teacher to have noticed this. Children are spending more and more time indoors, and the reasons for this are numerable. From simply the weather to real concerns for the safety and welfare of our children, we have a tendency to keep them 'safe' by keeping them indoors. The effects on their health, well-being and understanding of the world are becoming more and more evident.  Most children have such a disconnection with the natural world, they have little understanding of where their food actually comes from. 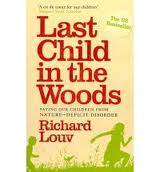 Also mentioned in this article is the book 'Last Child In The Woods' by Richard Louv. I would encourage parents and anyone who works with children to read this book. In it he has coined a phrase; 'nature deficit disorder.' And while this has not been 'legitimized by the medical community, there is substantial evidence to suggest that 'nature deficit disorder' is a prevalent factor. Louv feels that it is a factor in leading to such disorders as ADHD, and other childhood syndromes that make the lives of our children more and more complicated.
If we add to this the fact that, here  in Ireland, we are the first generation that does not grow any of our own food, and doesn't even really know how, I applaud the efforts of teachers like  Jerry Grogan, and the numerous other schools that are making real and very successful efforts to bring children back to an understanding of the natural world in the most logical and practical way.... get them to grow a garden. Well done!