With exactly one week to go until the BEST Book Day of the year, I hope you're all ready and as excited as I am. There's always so much going on; so much to do and so many activities to get the schools involved with.
So, I guess it's also time for me to finish up my 'through-the-years' posts of the events, authors, illustrators, storytellers and fantastic school visits that make World Book Day so memorable for me...and for a lot of other people as well. Let the time-travel begin!

For the World Book Day Extravaganza 2015, I had to add a couple of days later in the month in order to accommodate everyone! With lots of familiar faces, we all had a fantastic time! March turned out to be a brilliant month. 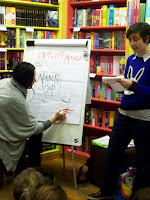 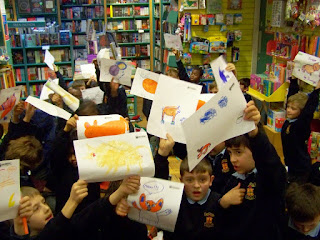 We welcomed Sadie Cramer back, and this time she brought Juliette Saumande with her! There were readings from their book Chop Chop Mad Cap , talk of where ideas come from, the chractersand their relationships with each other and how pictures are made. Then the kids got to work, drawing their own cat creations! 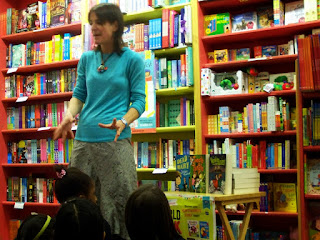 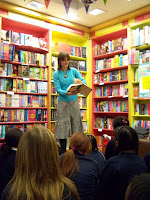 Debbie Thomas came to town and spoke of many things; her life, her books (Dead Hairy, Jungle Tangle and Monkie Business), how she became an author, why she writes the stories she writes, bees, amber and honey. The last three subjects lead very nicely into her (then) upcoming book Class Act, of which Debbie gave us all a sneak preview. She also read some of the poetry she wrote when she was seven years old! Fabulous! 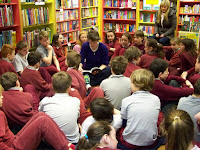 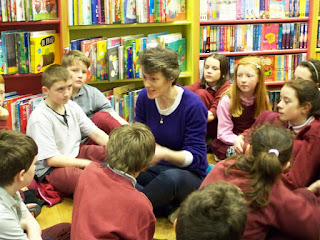 There was much excitement when Marguerite Tonery visited, sharing her wonderful fantasy book, Kapheus Earth. Surrounded by a sea of school children, there was talk of dragons, enchantment, Irish mythology and family life. In addition to Marguerite reading, Kapheus was passed around to the kids so they could show off their reading skills and really get submerged into the fantastical world of light, Kapheus. Magic! 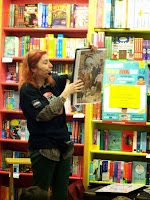 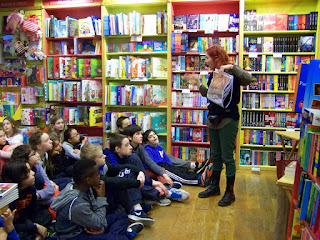 We simply couldn't miss the chance to have Nicola Pierce come back to us for her first ever presentation of her new book of 2015, Behind The Walls; a brilliant and gripping historical fiction work set during the Siege of Derry. She did recap on her previous books, Spirit of the Titanic and City of Fate (by request from the classes, who wanted to know everything!), but we were all mesmerised by the story of two brothers in 1688-89 Derry, locked within its' walls. 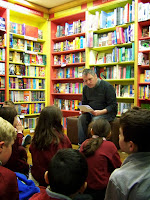 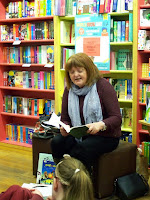 Later that month, Rab Fulton was back to try out some brand new hilarious and scary stories...and they worked just fine. No one knew whether to laugh or hide. So we did both.
And to finish up what was in danger of becoming World Book Month, Patricia Forde returned once again. But this time, it was to give us all a little taste of her fabulous new book, The Wordsmith (which was released in May of that year.) What a way to wind-up a month!


World Book Day 2016 was a year that saw many old favourites return to share their favourite books, favourite stories, their lives and their writing journey with sooo many school students. Patricia Forde was back with The Wordsmith; Nicola Pierce was there with more of Behind the Walls and her other fabulous historical fiction novels for young people; Debbie Thomas was back with the insightful and hilarious Class Act. 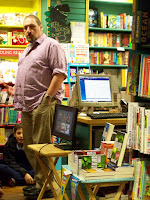 But the memory I really want to share with you; the ones that made it a year I will never forget came about in the most wonderful way. One of my authors had to back out due to medical circumstances just a week before World Book Day 2016. There were three classes that would have no special guest. While I am never adverse to stepping in and talking about books and reading to the classes (I always saved space in the schedule so I could do that anyway...), I decided to put out an emergency call to my author/storyteller friends, on the off chance that someone else could step in. I knew it was unlikely and as I suspected, everyone was already booked. 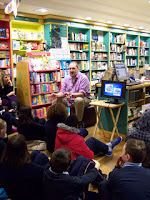 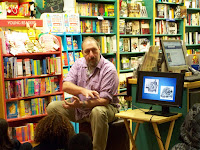 Everybody but one. So...it was an unexpected and completely overwhelming delight to welcome Andrew Lane to my World Book Day 2016 Extravaganza! Andrew made the trip from Bournemouth all the way to Galway to read and talk about his amazing Young Sherlock series; especially Knife Edge, in which a teenage Sherlock Holmes, on the way home from the Orient arrives in Galway, only to find his brother Mycroft waiting for him and a murder. Talk about fantastic! Once again, thank you so much, Andrew!!! You saved my voice, my bacon and gave the kids a memory they will treasure for the rest of their lives. You fired the imaginations and made a lot of fans that day.

World Book Day 2017 was a more 'low-key' affair than the previous years. I had moved bookshops and spent more time at schools, holding the events off site. But there were a few in the bookshop that brought a real lively spark to the place. 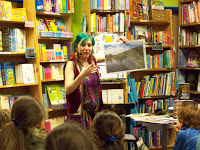 Nicola Pierce graciously followed me over to talk to two local school classes about her just out book, Kings of the Boyne; a follow-up (of sorts) to the previous Behind the Walls, as the two brothers now find themselves at the pivotal Battle of the Boyne. 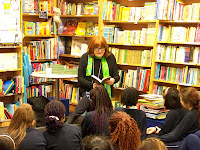 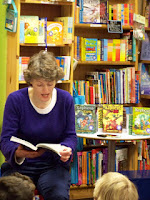 Patricia Forde made another appearance and really got the classes excited about reading, writing, characters and her book, The Wordsmith.

Marguerite Tonery was back with more (at the time 3!) tales of Kapheus. That's Kapheus Earth, Kapheus Air and Kapheus Water. Surrounded by children as always, they were held in the palm of her hand! 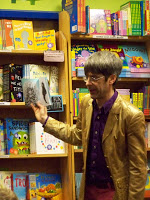 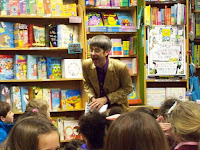 There was a wonderful highlight to WBD2017...a new face; the face of Julian Gough who came along to introduce the kids to his hilarious, thoughtful and insightful books for younger children; Rabbit and Bear. He explained the lives of these two unusual friends, as portrayed in his books Rabbit's Bad Habits and The Pest in the Nest. Then, Julian worked with the kids to create their own story, involving a cat-gummy bear stuck inside a crocodiles tummy. Lively and amazing!


I wish I had some memories of World Book Day 2018 to share with you. But last year was a cold and wintry one and for perhaps the first time ever, we were snowed out! Best laid plans and all that. I had hosted a few classes the following week, but as I was the one to read to them and I am the photographer...no photos!
That winds up World Book Day Through The Years. And it would seem, February as well.
Now, remember...you have one week until the big day rolls round. And starting next week, there are events, podcasts and all sorts of activities to help build the excitement about books and reading for pleasure. It really shouldn't just be a 'school' activity or something we do just to learn. Reading is a gift we give ourselves and it's important to start giving that gift early in life.
Happy World Book Day 2019, everyone. Tell me, what are you reading?