- February 16, 2019
Earlier this week, it was announced with great sadness that Tomi Ungerer, French author,artist,  illustrator, cartoonist, political satirist... passed away peacefully at his west Cork home.
Tomi published over 140 books, many of them childrens picture books. He was a champion of simple human dignity; always outspoken and never shying away from controversy. 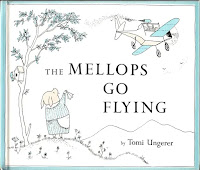 His first picture book, The Mellops Go Flying was first published in 1957. This was the first in a series about a family of pigs who go on adventures and find themselves in all kinds of quandries and predicaments. Irreverent and bold, it set the tone for a lifetime of thought-provoking and insightful books for children that never fail to delight.

His books were honest and bold at a time when childrens books were, in his opinion "ghastly - tame and unimaginative." When Tomi went to see the biggest published of childrens' picture books in the US, Golden Books, they were uninterested. The editor he spoke to there told him that the books were "unpublishable in America", but pointed him in the direction of the one publisher that would take his work at the time; Ursula Nordtrom at Harper. She did indeed publish him (and also published Shel Silverstein and, previously, the books of his good friend, Maurice Sendak.)

What followed from that point was a body of work that coloured the field for generations to come and he became a huge influence on nearly everyone.
Tomi will be greatly missed in the childrens' book world...and the rest of the world as well.
He is survived by his wife, Yvonne, two daughters, two sons, two grandchildren, a sister and all of us who came to know and love him through his books and art.
R.I.P., Tomi. Fly high and thank you for...everything.