- April 22, 2018
Hello! It's me again. Yes, I have been quiet as of late. There has been a lot going on in my life and I fear I have neglected Fallen Star Stories...apart from a few reviews, which rather a lot of you out there have been reading. Thank you for hanging in there with me.
I'm going to give a bit of catch-up for those of you who are interested in the world of childrens' literature and what is currently happening.
Let's start with a few awards and medals....

First big announcement; The 2018 Astrid Lindgren Award has gone to American author, Jacqueline Woodson. Jacqueline is 55 years old and lives in Brooklyn, New York. The author of more than thirty books, from novels to poetry to picture books, her writing frequently focuses on young people making the transition from childhood to adulthood. Covering such topical issues as racism, social and economic injustice, segregation, gender equality and exclusion, she shows a unique understanding of what young people
encounter, how they think and feel, what their true concerns centre around as they enter into the adult world. Possibly her most critically acclaimed book is Brown Girl Dreaming, an award-winning autobiographical novel, written in verse that tells her story, growing up in South Carolina and New York. In January of this year, Jacqueline Woodson was named as the National Ambassador for Young Peoples Literature in the US.

“It’s important to hold up mirrors for kids to see their experience is legitimate. Too often those mirrors aren’t there for them.” Jacqueline Woodson.
http://www.alma.se/en/Laureates/2018/ 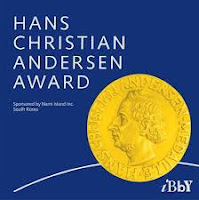 On 26 March, 2018, the International Board on Books for Young People (IBBY) announced the winners of the prestigious Hans Christian Andersen Award. Considered to be the "Nobel Prize" for chilrens literature, this award went to Eiko Kadono of Japan for writing and Igor Oleynikov of Russia for illustration. With a stunning range of charming, vibrant picture books, a great novel series featuring Kiki the witch or her wondrous novel set in World War II about a young girl who must travel through a strange and terrifying tunnel of trees on her way to school, Eiko Kadonos' books are always engaging; filled with life and humour and wonderful female characters with great self-determination and autonomy. Igor Oleynikovs' illustrations leap of the page to bring a magical world of both strange and familiar characters to life. They pull the reader
directly on to the page and into whatever tale he is illustrating. An amazing body of work!
http://www.ibby.org/awards-activities/awards/hans-christian-andersen-awards/hcaa-2018/ 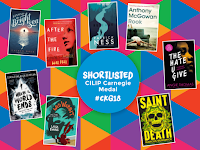 The CILIP Carnegie is rather YA heavy, with the books included being Release by Patrick Ness (stunning...and I'd really love to see him pull the hat-trick), After the Fire by Will Hill (wow...very strong and unique story line with fantastic characters), The Hate U Give by Angie Thomas (just powerful!), Beyond the Bright Sea by Lauren Wolk, Rook by Anthony McGowan, Saint Death by Marcus Sedgwick, Wed Wabbit by Lissa Evans and Where the World Ends by Geraldine McCaughrean. 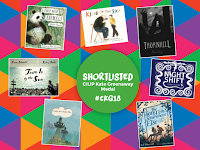 The announcement of the CILIP Carnegie and Kate Greenaway Medals will take place on Monday 18th June at a special daytime event at the British Library. The winners received £500 worth of books to donate to their local library, a commissioned gold medal and a stipend of £5000 cash prize.


And I'm just going to mention again (see post previous to this one), the Childrens Books Ireland Book of the Year Awards will be announced on 23rd May at a ceremony at Smock Alley Theatre in Dublin as part of the International Literature Festival Dublin!
http://childrensbooksireland.ie/cbi-book-year-awards-shortlist-announced/