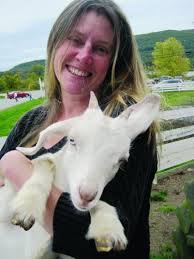 Childrens' author, illustrator and educator Anna Dewdney has passed away at the age of 50, following a 15 month battle with brain cancer. She died at her home on Saturday, 3rd September. After working as a waitress, day care provider, mail carrier and teaching history and art in a boys boarding school, Dewdney realised her dream of becoming a full-time author. She illustrator quite a number of 'chapter' books in the 1990s, beginning with The Peppermint Race by Dian Curtis Regan in 1994. Finally, in 2005, Viking published the first book she both wrote and illustrated; Llama, Llama Red Pajama. The tale of a young llama and his struggles to get to sleep won the hearts of children, parents, teachers and librarians everywhere. The story continued in a series spanning 10 books and Netflix is producing a Llama Llama series to be released in 2017.
In 2013, Dewdney wrote an article for the Wall Street Journal, in which she asserted that "empathy is as important as literacy" when considering the education of children. In the piece, she went on to say;
“When we read with a child, we are doing so much more than teaching him to read or instilling in her a love of language....We are doing something that I believe is just as powerful, and it is something that we are losing as a culture: by reading with a child, we are teaching that child to be human. When we open a book, and share our voice and imagination with a child, that child learns to see the world through someone else’s eyes.”
Anna Dewdneys' vision and compassion were a real gift to the world. In her passing, we have lost something rare and beautiful. But these gifts live on in her work.
Instead of a funeral, her final request is that we read to a child.
https://www.washingtonpost.com/news/arts-and-entertainment/wp/2016/09/06/this-beloved-childrens-author-didnt-want-a-funeral-she-said-read-to-a-child-instead/