Harry Potter and the Cursed Child...and some other great fantasy books 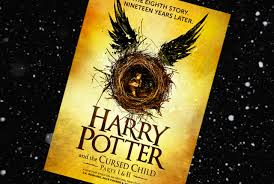 Two weeks ago, there was much excitement as the "new Harry Potter book" emerged on the scene. The expectation was enormous and, of course, the critics were there ready, willing and able to find fault and dash hopes of all Potterites everywhere. But I have to say, in my eyes this story did not disappoint.
Here are a few factors to consider while reading Harry Potter and the Cursed Child. It's a play script. No, it hasn't been put into 'book form'. It's not a novel of the play. JK did not go back on her promise to not write another Harry Potter story...it's the script of the play which opened in London on the same night. So, we do not get the paragraphs of description setting the scene, the long explanations of events in the wizarding world which have led us to this place or the involved character descriptions. Why would we? We already know this world. A lot of us have grown up with it. So as such, we should already be prepared to suspend our disbelief and immediately enter into the drama unfettered with explanation. And enter we do. Within a few pages, I was already there, in Hogwarts, held in the unfolding tale as if I had never left.
I won't give way to spoilers, in case you haven't read it yet. But just to give you the basics; the play opens with the very last scene from the last book. Adult Harry is standing on Platform 9 3/4, seeing his sons off to Hogwarts. The eldest, James, has already been before, but it is second son Albus' first year. He's nervous and feels he has too much to live up to; afraid he'll be a disappointment and won't measure up to his legacy. And in that very real emotion (which of us had felt we weren't enough) that the play really takes off; it's were it lives and breathes. This isn't so much a "Harry Potter" story, as it is an "Albus Potter" story. A nearly quintessential middle child, Albus is struggling with his place in the world, caught in the drama of being the son of a very famous wizard, feeling very much like the 'spare', he seeks to make his mark in the world, to right old wrongs that still haunt his father and to emerge as himself...to be seen as who he is, rather than in relation to who his parents are.
The action is strong, dramatic and filled with feeling. There are times when you want to cry out, No! Don't go there! Do you know nothing?!; but the reader is held with him every step of the way. Don't be afraid to read this book. It will not change any of the magic you felt in reading the series. Rather it adds to it. There has been a question as to whether we should revisit our favourite childhood characters as adults and whether this will taint our memory of them. But Harry figures so little in the story. He is the backdrop which makes the action occur,; the catalyst to the events. It is, well and truly, Albus' story. There are a few bits of dialogue that come off as rather twee, for example the use of the phrase "Thank Dumbldore" instead of "Thank God", but in the context of past events in the wizarding world, these can be easily forgiven. The story is marvelous! The characters, both old and new, are well conceived, well developed and thoroughly approachable. It very nicely rounds off the Harry Potter sequence and gives us a bit more closure and knowledge. Harry Potter and the Cursed Child is pure magic. Just read it...you really need to read it.
Fantasy fiction is such an important genre for children (and adults) to have in their lives. It gives a safe platform to address the quandaries and fears we face day to day, as well as a notion that any problem can be solved, or at the very least, worked on. There is a freedom and autonomy in fantasy that is lacking in more realistic fiction and helps the reader develop more imaginative pathways to navigate through the world. And the escapism is vital...particularly as so much of what we live with, what our children live with day-to-day can be so overwhelming and out of our control. We all need a break and to recharge. So here are a few extra wonderful fantasy books that you will all love. They may not be Harry Potter, but they are fabulous!

(The Uncommers) The Crooked Sixpence
by Jennifer Bell
I have a full review elsewhere on this blog, but to summarise; After Grandmother Sylvie is rushed to hospital following an attack, Ivy and Seb Sparrow find themselves whisked away to a world that lies just beneath our own ...a world where ordinary, everyday objects take on thoroughly uncommon uses. You'll never look at a belt or a toilet brush the same way again. Absolutely loved it!

Archie Green and the Magicians Secret and Archie Greene and the Alchemists Curse
by D.D. Everest
When Archie Greene turns 12, he is given a very strange book as a present from an unknown sender. He leaves his grandmothers' care to join his cousins in Oxford and discovers his role as a Flamekeeper - a guardian of magical books. Exceptional concept and story-telling make this series a must read.

Fenn Halflin and the FearZero
by Francesca Armour-Chelu
In a future world ravaged by flooding and dirty, poisoned waters, land is a rare commodity. Into the this world was born Fenn Halflin. Secreted away for most of his childhood, Fenn discovers the truth about his past and why he is such a threat to the Terra Firma and their wicked leader, his life takes a dangerous turn. Exciting and simply brilliant!

Cogheart
by Peter Bunzl
Lily Hartman, longing for the life of an air pirate, finds herself on the run for her life after her inventor father disappears in an airship wreck. With strange, silver eyed mechanicals hunting her down, she, Robert, a clockmakers son and Malkin, her faithful clockwork fox escape arson, murder and evil folk set on uncovering her fathers' secret at any cost. Brilliant steam-punk fantasy! Loved it!