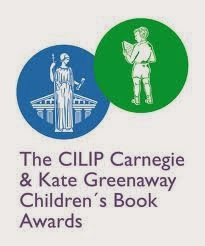 All submissions are in and the (rather extensive) lists for both the CILIP Carnegie Medal and the Kate Greenaway Medal 2014 have been announced. I'm not going to recount the entire list(s) here, because of space considerations. But I will mention a few of my favourites included on the lists.
The criteria for these very prestigious and minutely considered awards are very specific. Even to be nominated is an amazing honour for an author or illustrator.


For the CILIP Carnegie Medal 2014, the list includes:
Ghost Hawk by Susan Cooper
Mouse Bird Snake Wolf by David Almond
Breathe by Sarah Crossan
The Great Unexpected by Sharon Creech
North of Nowhere by Liz Kessler
If You Find Me by Emily Murdoch
Liar and Spy by Rebecca Stead
The Fifth Wave by Rick Yancey
Check out the link below for the complete longlist.
http://www.carnegiegreenaway.org.uk/pressdesk/press.php?release=pres_2014_nom_announce_carnegie.html

On the list for the Kate Greenaway Medal 2014, you'll find included
The Paper Dolls by Julia Donaldson/ illustrator Rebecca Cobb
When It Snows by Richard Collingridge
King of Space by Jonny Duddle
The Mysterious Traveller by Mal Peet & Elsbeth Graham/ illustrator PJ Lynch
Phoenix by S. F. Said/ illustrator: David McKean
The Wind in the Willows by Kenneth Graham/ illustrator: David Roberts
Oliver by Birgitte Sif
And for the complete longlist, here's the link:
http://www.carnegiegreenaway.org.uk/pressdesk/press.php?release=pres_2014_nom_announce_green.html

Both lists are filled with amazing books for all ages. I've managed to make my way through most of them over the last year. I'm absolutely delighted that I'm not one of the judges whose responsibility it is to whittle this list down to the shortlist and ultimately the winners... the job would be too difficult.
Best of luck to all of the nominees!