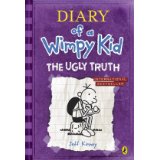 As you must all be aware (from all the excitement in the air as vast numbers of children exited bookshops clutching a shiny new purple coloured hardback with HUGE grins on their faces), last week on the 10th of November saw the release of "Diary of a Wimpy Kid: The Ugly Truth". Greg Heffley is growing up fast, and,  he now has to deal with the pressures faced in the teenage years, particularly difficult, and hilarious!, for a wimpy kid. "Wimpy Kid" has always had huge success, but this is ridiculous! As, I said, the book arrived on the 10th, in quantity, and we (Dubray Books, Galway) were completely sold out by Tuesday afternoon. (Don't worry, quantity is on the way back in... and may even be there as we speak!) According to Bookseller, during the last week, which was it's first week, "...The Ugly Truth" ranked third in sales, including all sales, not just children's books, selling an impressive 30,312 copies. And, Wimpy Kid outsold the other big book released on the day (Decision Points by George W. Bush) by nearly double the amount!
Truly fantastic news for such a delightful, hysterically funny and exciting series that has very quickly become a favourite of every child (and some of us big kids, too) in the country. Wimpy Kid is an everyday hero we can all relate to....
Go, Wimpy Kid, Go!!!!!!