HAPPY PUBLICATION DAY!!!!!
Welcome to my post for the WONDERSCAPE Blog Tour, celebrating the arrival of the brilliant new book by Jennifer Bell.
The spine-tingling concept of Wonderscape really caught my imagination, with its' blend of time travel and gaming as the backdrop of an intriguing mystery and some unlikely historical heroes along for the ride.
Get ready to jump in.... 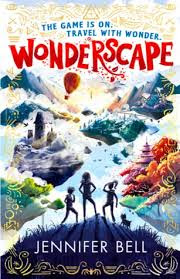 WONDERSCAPE
author: Jennifer Bell
cover illustration: Paddy Donnelly
Walker Books (4 June 2020)
ISBN: 9781406391725
A mysterious explosion at 27 Peacepoint Estate draws the immediate attention of 13-year-olds Arthur, Cecily and Ren. On their way to school, they hear a dog whimpering inside the cottage and run in to rescue the poor pup. They are sucked through a portal and find themselves locked in a cabin of a ship called The Principia, captained by none other than Sir Isaac Newton...and strangest of all, in the year 2473. Arthur, Cecily and Ren are lost in the Wonderscape, an in-reality game filled with very real danger and deeply hidden secrets that could cost them everything. Transported through different realms, they face perilous challenges; icy avalanches, white-knuckle car races, fighting off sword-bearing samurais; and acquire the help of a highly unusual cast of real (oddly alive!) historical figures who pass on their unique knowledge. All the while, the three are  desperately seeking missing Wonderscape creator, Milo Hertz...who may just have the solution that will get them home before it's too late...forever.

"It was early morning and Arthur was already running late for school
when the gnomes exploded."
Okay...you have my attention. From this very first line, Wonderscape starts a raucous ride that doesn't let up. With drama and humour, a truly advanced future technology with physical skill and quick thinking, a cleverly crafted tale rapidly evolves in true game-like fashion that peaks interest with the turn of every page. It's fast-paced plot and clear, rolling story-telling weave a fantasy adventure that fully engages the reader, allowing entrance to each realm along with our young heroes. Brief, intricate descriptions of each setting create a strong sense of place and time; and fills  the travel from realm to realm with a definitive vision. (All of this actually makes it ideal for capturing the interest of reluctant readers.) But this isn't a virtual reality; it's an in-reality gaming world. What happens in the Wonderscape, actually happens. There is no margin for error. Our three heroes have to combine forces and keep their wits together in order to make it through the challenges. The alliance between them has to develop quickly with no time to debate their differences; they must rely on each other. As this happens, a real empathy grows between them that, under more normal circumstances, probably wouldn't have. A real lesson for all of us. Quick and quirky, intense and funny, filled with excitement and intrigue; Wonderscape is a journey of a lifetime...or several. Travel with wonder!
https://www.walker.co.uk/Wonderscape-9781406391725.aspx


But what of the historical heroes? Their appearance in the Wonderscape; very unlikely to appear in a story together, adds a sense of how diverse aspects and knowledges building on one another to make a winning solution. We have Sir Isaac Newton, the extraordinary scientist who discovered gravity; Tomoe Gozen, honoured 12th century female samurai warrior; Mary Shelley, the celebrated author of Frankenstein and Wangari Maathai, inspirational environmental activist and winner of the Nobel Peace Prize. I would never think of putting these people together. And yet...
One thing it did make me think about was  my own fascination with history and how to bring it alive in the present. Who are my heroes , and how would they fit into the Wonderscape. So when we were asked to include them in our posts, I jumped at the chance! Here are two from me; one historical and one modern day hero. See what you think....

Historical Hero:
Name: Queen Aliquippa
Level Theme: Guidance for young heroes
Hero Factor: Loyalty and wisdom: Born between 1670-1700, little is known of Aliquippas' early life, but soon enough she emerged as a strong and clever woman-warrior who was a force to be reckoned with. While it was not unusual for women to influence tribal policies, Aliquippa became the leader of a small band of Mingo Seneca natives in Western Pennsylvania. Her area became a place of retreat and refuge during the French and Indian Wars and she was fiercely loyal and protective of those who paid her and her people proper respect, including a young Major George Washington. Her easy ability to maintain order meant Aliquippas' council was sought after by the surrounding tribal councils, and by the army forces and traders as they moved westward, always stopping by her township to pay tribute and seek her wisdom.

Hero Factor: Compassion and determination: In 2017, 7-year-old Jacob became concerned when seeing a group of homeless people taking shelter in Brighton. So he came up with an idea.  He held yard-sales, sold his toys and things his family didn't need and Jacob began to fill rucksacks with essential items for people sleeping rough. His kindness and determination was infectious. Soon others started donating to Jacobs' Backpack Campaign. Jacob initially had a goal of handing out 10 backpacks to those in need, but thanks to his tenacity and the kindness he inspiration in others, he surpassed that by more than 120. See...it doesn't matter how young or small you are. You can make a difference and be a hero!