WE MUST NOT FORGET: Auschwitz, the Holocaust and Books to Help Us Remember 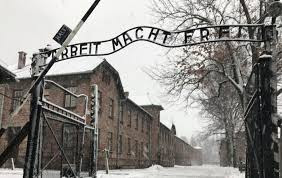 Today, 27 January 2020, marks the 75th anniversary of the liberation of Auschwitz; the day when the Red Army arrived at the gates of this most infamous of the Nazi concentration camps and saw, for the first time, the horrors that it held. It stands today as a memorial; a stark, gut-wrenching reminder of what human beings are capable of doing to other human beings in the name of...I'm still not sure. in my mind, it must be in the name of some kind of insanity that I hope never to fully understand.
Today, we honour the few remaining, who have opened their memories to tell us what really happened in the horrific time and place as first-hand witnesses and survivors of the atrocities. But 75 years is a long time and soon, I fear, we will lose these living memories. We need to understand what can happen, what did happen and what we must not let happen again.  Our children need to know what happened in those dark times and why. We must not let the memories of the survivors fade...we must not forget.

Over the years, there have been quite a number of books written for children and young people telling the stories. Here are a few of my recommendations that will keep the memories alive and help our children to understand.
Of course, we must begin with The Diary of a Young Girl by Anne Frank. This is a book of writings taken from the diary of Anne Frank while she was in hiding for two years with her family during the German occupation of the Netherlands. It begins in June 1942 and documents daily life; the ever-present threat of the Nazis, the small joys, the comfort she found in her family and friends...all the thoughts and feelings of a young girl in these unimaginable circumstances. But though they were unimaginable, the circumstances were real. The Frank family was captured in 1944, and Anne died in the Bergen-Belsen concentration camp in 1945 of typhus. Her diary was retrieved and placed back in the hands of her only surviving family member, her father.

Tomi: Tomi Reichenthal's Holocaust Story
author: Eithne Massey
O'Brien Press (ISBN: 9781847179753)
Tomi grew up in a small village with friendly neighbours, a happy family and many friends. But things changed. First Tomi was told he couldn't play with some of his friends any more and then the police began to take away his friends and his family. By age 9, he was on the run in fear of his life. Soon came the day when he was taken, with many others, to the Bergen-Belsen concentration camp. In this biographical novel, Tomi tells his story so that it will not be lost in the sands of time...and in hope that it will never happen again.

When Hitler Stole the Pink Rabbit
author: Judith Kerr
HarperCollinsChildrensBooks (ISBN: 9780007274772)
This semi-autobiographical novel came into print over 45 years ago and has gone on to be a much loved modern classic. It is the story of what happened to one Jewish family; how they had to flee Germany before World War 2 broke out; how they were secreted away by their mother, running from place to place to escape a horrific fate. Told from the perspective of Anna, a nine-year-old girl, it closely mirrors the youth of Judith Kerr herself. This and the 2 sequels give a vivid picture of the life of, not just one child, but the fate of many as Hitler moved across Europe, changing their worlds and lives forever.

Number The Stars
author: Lois Lowry
HarperCollinsChildrensBooks (ISBN: 9780007395200)
In 1943 Copenhagen, life has become increasingly complicated for 10-year-old Annemarie. With the Nazi occupation, there are curfews, food-shortages and soldiers on every street. As difficult as it is for her, it is even more so for her best-friend, Ellen. Now that the Nazis are planning to arrest all the Danish Jews and will come at any moment, Ellens' life is in certain danger. Annemarie musters all her courage to commit one selfless act; she will help stage a daring and dangerous escape. Inspired by true stories of the time, this is a poignant and moving read that brings the past to life.

The Winter Horses
author: Philip Kerr
Walker Books (ISBN: 9781406360011)
A World War 2 story of survival with a bit of a twist. Max is the keeper of a wildlife preserve who has learned to keep secrets and deal with the Nazi soldiers who have taken over his land. One of the secrets is the young girl, Kalinka. She has lost her home, family, possessions; everything but her life and is in hiding on the wildlife preserve and has gained a deep friendship with the wild, rare Przewalki's Horses who wander there. But, a Nazi campaign of extermination in search of perfection has eliminated all but the last two. Kalinka embarks on an epic, treacherous journey across the harsh Ukrainian landscape to save the horses...and herself.

Flight
author: Vanessa Harbour
Firefly Press (ISBN: 9781910080764)
In 1945 Austria, young Jakob is hiding out, sheltered on Herr Engels' rural estate after losing his home and family to the German occupation. There, he tends the Lipizanner stallions also hidden there. Herr Engel knows that Hitler wants these beautiful horses for his own. He also knows that if the Nazis' find Jakob, it means certain death. When a German officer comes looking for both, the horses and Jakob must steal away across the Austrian Alps in hope of reaching safety. They are joined by a young Roma girl, Kizzy who is running from the Nazis' for reasons of her own. A gripping, at times harrowing story that is full of heart and insight.

Once
author: Morris Gleitzman
Puffin (ISBN: 9780141320632)
For 3 years and 8 months, Felix has lived in a convent orphanage high in the mountains of Poland. But Felix is different from the other orphans. He is convinced that his parents are still alive and will return to get him one day. When the Nazis arrive at the orphanage and burn all the nuns' books, Felix is terrified for his Jewish bookseller parents. He escapes the orphanage and begins the arduous, dangerous journey through occupied Poland to find his parents. Along the way, he joins forces with a young girl named Zelda and Barry, a kindly dentist who hides and cares for Jewish children. When the Nazis' arrive, Barry makes the ultimate sacrifice to keep the children safe. Intense, stunning and one everyone should read.
There are, fortunately so many more books that paint a vivid picture of the time and embed  in children and adults alike a sense of the urgency of remembering, of listening and of why this kind of horrible, inhuman act must never happen again. They also embed a sense of courage, conscience, strength and determination; a sense of the best of human spirit and of hope...if only we will allow it.