Marguerite Tonery on the World of Kapheus I first met Marguerite Tonery late in 2014 when she published her first book, Kapheus Earth. This marvelous story instantly transported me to another world; a world of enchantment and legend, of dragons and talking woodland creatures, of Grandmother Oak who imparts her wisdom and protection on all she surveys...the world of two ordinary children, Elisa and Jamie, whose lives are transformed forever by a magical drawing that takes them to face their true destinies. It was followed by Kapheus Air in 2015 and Kapheus Water in 2016. Later this year, Kapheus Fire will join the series and this journey will take a different turn. (Yes, I've read the manuscript...no, no spoilers!) Off the back of Kapheus, Marguerite has launched Tribes Press, an independent self-publishing company with the aim of helping indie writers to realise their potential and self-publish their books.
I had the opportunity to ask Marguerite a few questions about Kapheus. I think you'll find the answers fascinating, as they open up another dimension for these amazing reads. 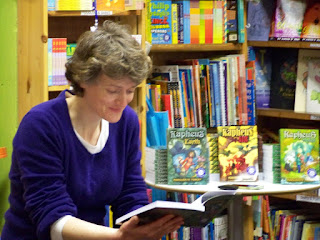 MEJ:  Where did the name ‘Kapheus’ come from? It’s meaning?
MT: Ka is the Sanskrit for light, and this to be a book series that was about the fantastical world of light. 'Phe' is found in Greek and has the meaning to speak or be spoken about, and I like the idea of a book being spoken about. By now I had Kaphe and it was a lilt from then on to create the word Kapheus.
MEJ: In these books, there is a very special relationship between our contemporary world and the world of ancient myth and legend; the impact they have on each other. Can you explain your feelings on that?
MT: I find when I write that the words flow through me. I think the mix of contemporary and the world of ancient myth and legend is still very much alive in each one of us and it will flow through us in our words, thoughts and deeds. It is probably more about Carl Jung's theory of psychology when he wrote several books on archetypes and how our psyche contains elements that are common to all human beings. These elements find their ways into all our lives regardless of the culture in which we have been immersed.

MEJ: Intergenerational themes are clearly important in the story, with the older characters acting as mentors to the children. But rather than circumvent the parent/child relationship, it seems to bring it to the fore as the books continue. (Most authors don’t do that.) Can you talk about the exploration of family relationships in Kapheus and how the use of travel between the magical and ‘real’ worlds effects this?
MT: When I read books as a child, the common theme as I saw it was parental-child conflict, separation and so on, such as in the Narnia books and in Alice in Wonderland. The parents were very separate entities and were distant to the children. There are always the generational gaps and breakdowns in understanding that occur, but I wanted to give children who read the Kapheus series the opportunity to look at the world through the eyes of the grown ups at times and to be able to ask for help and to receive it when they needed it. I wanted to impart some knowledge onto the children from the adults in the books when it was that Elisa and Jamie's parents didn't have the skill set to deal with a particular thing.  I wanted to place the parent-child relationship into the heart of the Kapheus series and to give both parents and children alike the platform to work through difficult moments. There are many things left unsaid between parents and children and this can often give rise to resentments and misunderstandings. I want to use the richness of this to drive understanding in the reader.
MEJ: There is a strong appreciation and respect of the natural world in the books. The titles reflect the elemental nature of the continuing story. Can you talk about the importance of this?
MT: I can only write about what I know. I love nature and I spend time in it everyday. I see the fox and the badger and rabbits and a whole host of animals each day and nature is what keeps me grounded. I would never be able to write about life in an apartment block in New York, and you know, a child said that he loved Kapheus, because there are so many books about cities and apartments. He wanted to read about other stuff like the animals and the trees and nature. It was nice to hear this from a book worm.

MEJ: Simple question: do you believe in magic?
MT: Yes. Who doesn't? Ireland is after all the land of leprechauns and fairies and mythological legends. Everywhere you turn there's a story about a mythological hero.

MEJ:  From going on the self-publishing journey with the Kapheus series, you have now founded Tribes Press, a self-publishing company in April of this year. What were your reasons for doing this? Where do you hope to take it?
MT: I saw that there was a need for it. There are a lot of people self-publishing at the moment and they fall into traps and lose money. I have been through the process and have gained a great deal of experience along the way. I wanted to set up Tribes Press to support people in getting their book to the market without all the stress. I also wanted to support them in the promotion of that book and even help authors translate their books into another language in order to access a wider book market. I want to see Tribes Press grow over the coming years and for it to be the go-to publishing house for self-published authors.

Kapheus Earth, Air and Water make fantastic reads for any tie of year, but with the summer months upon us, these books will keep the young bookworms in your life absorbed and excited about reading at a time when there are many other distractions. They also make fantastic books to share for your own storytime-togetherness reading.
You can find the Kapheus series in bookshops and they are available to order from Tribes Press.
www.tribespress.com