- January 11, 2017
After the craziness of the holiday, as the kids go back to school, in the book world our attentions turn to "so...what's next?" So, very briefly, I wanted to share a quick glance at some of the brand-new-out-now and soon-to-be-released titles that I am particularly excited about. It looks like it will be a very good year for books! 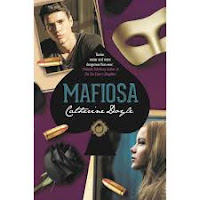 I have already put up a few reviews for books released at the beginning of this month, but they bear mentioning again. There are fantastic books that slipped in as we were doing the beginning of the year clean-up....so to speak.... and are ready to kick-start 2017 into a whirlwind of great book activity.

Let's start with the teen/YA group. Mafiosa by Catherine Doyle is the third and final in the Blood for Blood trilogy. A powerful and turbulent story that finds Sophie now under the protection of the infamous Falcone family and trying to prove her loyalty to them. Caught between 2 brothers vying for her affections and bent on revenge for her mothers' murder, this one is filled with emotional turmoil, deadly circumstances and an ending that you will never see coming. The plot twists will keep you up all night reading.Bone Gap by Laura Ruby is an eloquent, lyrical act of magical realism that takes us to the small town of Bone Gap, a place where anyone can slip away unnoticed; without a sound. Beautiful immigrant Roza disappears just as easily as she appeared. But she hasn't just vanished unnoticed. Finn knows that she has been abducted by a strange, sinister man whose face he cannot remember...but no one believes him. Eerie, moving and mysterious, this one was my selection for Dubray Teen Recommend for January. Simply spell-binding. In The Icarus Show by Sally Christie, we meet Alex, who has worked out a fool-proof method for avoiding the bullies notice; simply don't react. But his new next door neighbour, David does react and becomes targeted as a weirdo. When mysterious notes start turning up in everyones' school bags, the attention turns from David and starts a mystery hunt that ends in near-tragedy. An intriguing, compelling story of friendship and understanding that takes a poignant look at bullying, loneliness and mental health issues and compels the reader to be more aware. Bone Sparrow by Zana Fraillon is out now in paperback. This novel about a young refugee and brief segment of his life in a refugee camp (all he has ever known) is an urgent read that gives us a wondrous, heart-felt story and is a very important book for our times.

As we move into February, we are anxiously anticipating the release of  We Come Apart by Sarah Crossan and Brian Conaghan. It throws together Nicu, a young Romanian in search of a better life with Jess, who would never normally even look twice at him. They meet while in community service and, as their relationship becomes closer, secrets are revealed...secrets about domestic abuse, racism, alienation, poverty and expectations. A powerful verse-novel, it will break your heart and give you much to consider.

UnConventional by Maggie Harcourt takes us into the world of, well, conventions. This comedic romance brings together Lexi, who is trying to make it through sixth-form college while acting as her Dads' right-hand man in his convention circuit, and Adrian, or Hayden Swift, a young author who has just released his first fantasy novel and receiving a lot of attention. It is great fun and brilliantly touches on first love, jealousy and the world of PR. Perfect for fans of Rainbow Rowell! Lisa Williamsom makes a welcome return with All About Mia. This is a wonderful read about Mia, the middle child caught between her  perfect older sister, Grace and sweet, star-swimmer Audrey. Mia is a breath of fresh air; charming, chaotic and, generally speaking, nothing but trouble. A fabulous, exciting voice tells a story of family drama.

A Dangerous Crossing by Jane Mitchell will be released at the end of February and, personally, I can't wait. Adding to the list of refugee stories, this one packs quite a punch. Ghalid doesn't want to leave his home, but Syria is far too dangerous now and his family has no choice. The journey they brave takes them through many dark, dangerous places to the horrific conditions of a refugee camp...and that is before they face a long voyage on a boat that may never make it. Insightful, heart-felt and, at times, horrifying, this is gives a passionate and considered view that will stick with you.

March comes in like a lion, indeed. Optimists Die First by Susin Nielsen (author of We Are All Molecules) takes us into the life of self-avowed pessimist, Petula. She has done everything to avoid friendship and happiness since the death of her younger sister. And then she meets Jacob, an amputee, in the worlds' worst art therapy class. A novel about friendship, heart-break and growing up in an unfair, tragic world. Melinda Salisbury brings us The Scarecrow Queen, the concluding part of the dark, fabulous trilogy that began with The Sin-Eaters Daughter. This is fantasy at its' most delicious!

If you like historical fiction, I'd suggest checking out My Name Is Victoria by Lucy Worsely. Coming off the back of her debut, Eliza Rose, this takes us on a journey to the world of Queen Victoria's childhood as we've not seen it before. (Highly suitable for younger teen readers.) Also, look out for Following Ophelia by Sophia Bennett. for older teen readers, this is a highly charged romance set against the backdrop of the Pre-Raphaelites. With Bennetts' keen eye for revealing the inner workings of whatever world she is writing about, this promises much.

The White Hare by Michael Fishwick is the launch title for the new Young Adult imprint from Head of Zeus. A fantasy set in rural Somerset, this is a powerful story of love and loss which fuses with mystery and myth and legend. Orbiting Jupiter by Gary D. Schmidt is an exquisitely written novella telling the story of a 14-year-old boy in search of a baby daughter he has never seen. Absolutely beautiful and profound, coming in paperback in March.

And this is just a taster for the YA/teen readers!