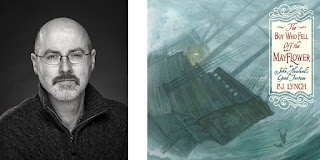 Irelands new Childrens' Laureate; Laureate na nÓg; has just been announced. I offer, along with the rest of the book world in Ireland, my sincerest congratulations to the one and only PJ Lynch.
PJ Lynch is the fourth Laureate na nÓg, having been handed his 'baton' by the outgoing Laureate, Eoin Colfer. He is the illustrator of over 20 incredibly beautiful books. He won the Kate Greenaway Medal twice, initially for The Christmas Miracle of Jonathan Toomey, written by Susan Wojciechowski and also for When Jessie Came Across The Sea, written by Amy Hest. His most recent book The Boy Who Fell Off The Mayflower, was both illustrated and written by PJ.
As he was crowned Laureate na nÓg today, PJ told off his plans for the next 2 years;

“Being named the new Laureate is one of the proudest moments of my career. I want to explore the magic that happens when words and pictures come together. My theme as Laureate na nÓg will be “The Big Picture” – I plan to do a regular podcast involving live drawing or demonstrating techniques and I’ll invite guests to talk about their drawing passions. I would also love to create a landmark image in a prominent place or places in Ireland as a permanent reminder of the power of pictures to incite the imagination.”


I am extremely excited for the next two years, which will be amazing. Again, my heartfelt and sincere congratulations to PJ Lynch.
http://www.theguardian.com/childrens-books-site/2016/may/17/pj-lynch-irelands-childrens-laureate-na-nog