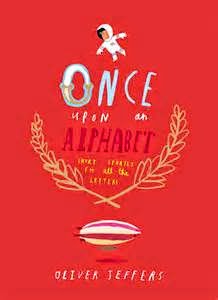 The winner of the Childrens Book Ireland Book of the Year 2015 (the 25th annual awards) was announced today at a ceremony at the Light House Cinema in Dublin. So....biggest congratulations go to picture book Once Upon An Alphabet for being chosen the overall winner of Book of the Year 2015. Jeffers also won the Childrens Choice Award, being the third author to take home both.
creator Oliver Jeffers for his wonderful latest creation,

Four other awards were given at the annual celebration.

The Honour Award for Illustration went to Chris Haughton for his third and completely stunning book, Shh....We Have A Plan. 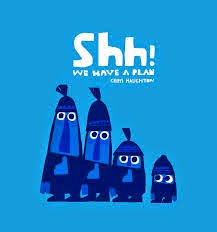 The Honour Award for Fiction was given to Áine Ní Ghlinn for her Irish language book; Daido.
The Judges Special Award was received by Gabriel Rosenstock and Brian Fitzgerald for the wonderful Haiku Más é do thoil é! (Also in Irish language...and absolutely beautiful.)
And finally, the Eilís Dillon Award for first childrens book went to

Louise O'Neill for the powerful (and frightening) Only Ever Yours.
Congratulations to all the winners...and to all who were nominated for these awards.

By way of further explanation about the CBI Book of the Year Awards (formerly the Bisto Awards):


"The CBI Book of the Year Awards are the leading children’s book awards in Ireland. The Awards are a celebration of excellence in children’s literature and illustration and are open to books written in English or Irish by authors and illustrators born or resident in Ireland and published between 1st January and 31st December each year."
http://www.childrensbooksireland.ie/