- February 11, 2015
The list for the Carnegie and Greenaway Awards have been announced today. But before I post about that I want to congratulate the winners of the Ezra Jack Keats Foundation Awards for  New Writer and New Illustrator.
The Ezra Jack Keats Foundation is responsible for many programmes in support of children, schools, public libraries....any institution or people dedicated to highlighting excellence and diversity in childrens literature. To this end, the Ezra Jack Keats Awards were established to honour writers and illustrators whose work continues in the spirit of Keats. 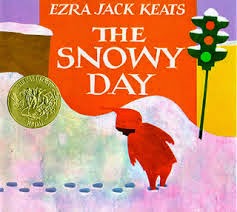 Ezra Jack Keats created a number of wonderful and innovative picture books that broke barriers and crossed social boundaries in its' celebration and depiction of the world of childhood. His 1962 classic, The Snowy Day, shows the world of children in the tenements and empty lots on a day filled with snow. There is loneliness, friendship, joy, wonder and courage. Keats believed that children of colour had the essential right to see themselves as heroes in picture books and that all children deserved to see different ethnic backgrounds living and learning the same way the world over.
So, on with the awards: 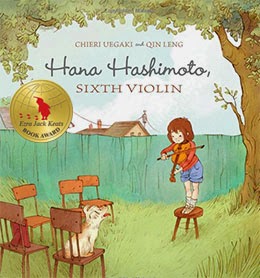 The Ezra Jack Keats Award for New Writer goes to Chieri Uegaki; a Japanese-Canadian author who Hana Hashimoto Sixth Violin. Hana signs up for a talent show, inspired by her grandfather a violinist. While only a beginner, Hana battles her self-doubt and stage fright and lets her imagination set her musical gift free.
learned English as a second language and took her love of writing from her childhood through to a university degree in creative writing. Her books feature lively girls with independent, creative spirits. Evidenced in her book
The Ezra Jack Keats Award for New Illustrator this year goes to the only and only Chris Haughton. Chris uses of colour and design combine with few words to create dramatic, joyful picture books that transgress language barriers to delight children (and adults!) of all nationalities. His latest, Shh! We Have A Plan is pure delight in blue, as a band of hunters seek to capture a bird, with very unexpected results. 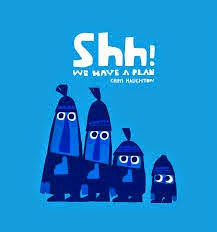 Huge congratulations to you both!
http://www.ezra-jack-keats.org/2015-book-award/#