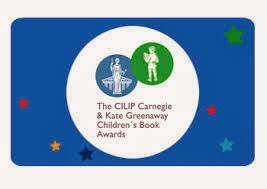 
Of course I have my favourites in both lists; but I am truly glad that I am not making the decision. It would be too difficult!
The shortlists will be announced on March 18th, and the winners will be announced in June. For more information about the lists and The CILIP Carnegie & Kate Greenaway Medals, follow the link to the website where you will find everything you need to know.
All the best to everyone!
http://www.carnegiegreenaway.org.uk/pressdesk/press.php?release=pres_2014_long_announce.html