Some of the Best Childrens' Books!

- December 13, 2013
Here are some of my favourite books for young readers this year. There have been some fantastic books and it is so difficult to select 'the best'. See what you think. In no particular order.....

WAFFLE HEARTS: Lena and Me in Mathildewick Cove
author: Maria Parr translator: Guy Puzey
Walker Books (2013) ISBN: 9781406341362
In a small fjord-side village in Norway, Lena and Trille get up to all kinds of adventures! Singing Christmas Carols in summer for change; re-enacting Noah's Ark, visiting with Auntie Granny; they are always together. Trille knows that Lena is his best-friend, but does Lena feel the same? This book is about friendship, family and living in community. A gentle, fun and warm book that shares all the best traits of writers like Astrid Lindgren!

FLORA AND ULYSSES: The Illuminated Adventures
author: Kate DiCamillo illustrator: K.G. Campbell
Walker Books (2013) ISBN: 9781406345186
Flora Belle Buckman is 10 years old and a self-proclaimed cynic. She is an avid reader of Terrible Things That Can Happen To You and is prepared for any disaster, large or small. When she witnesses a squirrel being sucked up by a neighbours' vacuum cleaner, Flora rushes to his rescue! But the squirrel has been changed by his experience and Flora is about to discover that maybe, just maybe being a cynic all the time isn't all it's cracked up to be. Funny, delightful and, let's face it, Kate DiCamillo can not write a bad book!

LIAR & SPY
author: Rebecca Stead
Andersen (2013) ISBN: 978189395427
Georges has had to move house and, with his mother 'working' all the time, he never gets to see her. They communicate through messages left with Scrabble tiles. His new friend, Safer, isn't quite what he seems. Life isn't easy. When Georges becomes inducted into becoming a trainee spy for Safer, it does become much more interesting. Stead is a brilliant author! Liar & Spy is a real gem; highly readable, witty and moving. One of the very best this year.

THE LAST WILD
author: Piers Torday
Quercus (2013) ISBN: 9781780878300
An extraordinary boy named Kester is taken from his 'boarding school' by a flock of pigeons and a gang of cock roaches. When he arrives in a place where the last wild creatures are hiding, Kester realises that something has gone terribly wrong in the world...and it's up to him and the Last Wild to put it right. An amazing, exiting adventure that will change your perspective. Brilliantly written for fans and fantasy and dystopian fiction. 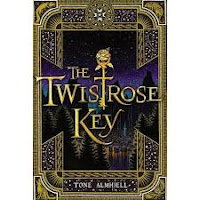 THE TWISTROSE KEY
author: Tone Almhjell illustrator: Jan Schoenherr
Little Brown Young Readers (2013) ISBN: 9780349001661
This has got to be my book of the year! There is something wrong in the house that Lins' family have rented. The clocks move far too slowly and frost covers the ground, even in the pouring rain. Lin receives a 'twistrose key'; a special key that leads through a gate in the cellar and into the land of Sylver. All is not well in Sylver either. An amazing fantasy adventure that you will not be able to put down. Beautifully written and lushly illustrated throughout.Everyone should read this book!

YOUNG SHERLOCK HOLMES 6: KNIFE EDGE
author: Andrew Lane
Macmillan's Childrens Books (2013) 9781447248828
(Well... read the whole series, actually!) A sinister psychic; a mysterious beast and a strange and impossible murder... life is always on a knife edge for young Sherlock Holmes. After being kidnapped and taken to the Orient, young Sherlock is heading home on a merchant ship. The closest he can get is Galway, where he is met by Mycroft. His brother needs his help as he is on a mission for the British government. But it isn't as straight forward as it should have been. Exceptional writing and intricately layered story lines that hold true to the original Conan Doyle series, meet the legend as a school boy! Fabulous!

CLAUDE ON THE SLOPES
author/illustrator: Alex T. Smith
Hodder Children's Books (2013) ISBN: 9781444919110
Yet another in the Claude series! Have you met Claude the dog, yet? You really should! On his latest adventure, Claude and best friend, Sir Bobblysock have a great winter's day... throwing snowballs, building a snowman and... ummm... causing an avalanche. (There are five books in the Claude series, and you can start anywhere you like. Smith reintroduces Claude and his family at the beginning of each book.) Hilarious, easy-read adventures that will leave you laughing and wanting more.

THE POWERS: The Not-So-Super Superheroes
author: Kevin Stevens illustrator: Sheena Dempsey
Little Island (2013) ISBN: 9781908195838
Everybody loves a superhero story... of course The Powers (all of whom have their own super powers) do have their difficulties. Take Suzie, for example. She lives in a family with super-powers, but poor Suzie has none. Or does she? Does he even want super-powers when the rest of her family can't seem to control theirs? The kitchen is flooded by Mum's rain storm due to the fact that Dad has set the kitchen on fire with his and brother JP can't remember that, when flying, it's best to wait until you're outside for take-off. Hilarious fun for the family! 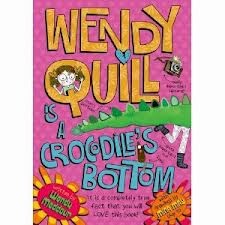 WENDY QUILL IS A CROCODILE'S BOTTOM
author: Wendy Meddour illustrator: Mina May
OUP Oxford (2013) ISBN: 9780192794635
Wendy Quill will be a little bit famous... all it takes is being a crocodiles' bottom in the school play, taking a part as a tap-dancing munchkin in her best friends' dance recital and finally... FINALLY... making the headlines by 'catching' the plague and saving her teacher from the school rat. Just brilliant and delightfully illustrated, this is bound to become a firm favourite!

I'll leave you with these.... for the moment. (Told you it was difficult to pick my 'best'.)