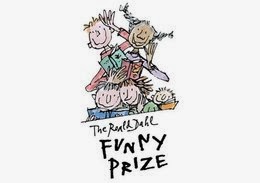 The Roald Dahl Funny Prize 2013 shortlist has been announced!
Each year, the Roald Dahl Funny Prize celebrates the funniest books for children in two categories: for children under six and for children aged 7 to 14 years. This year's shortlist features a host of yeti's, bottoms, weasels, geeks and parents out of control (among others.) There have been six books selected in each category, and the winner of each will receive £2500. The prize will be presented in an awards ceremony on Tuesday, December 10th at the Cambridge Theatre in London.
As ever, this year's judging panel is chaired by the incisive Michael Rosen. The panel consists of author/illustrator Sarah McIntyre, comedian John Kearns, columnist for the Guardian Marina Hyde and last year's winner in the 7-14 category, Jamie Thomson.
And the shortlists are:
Funniest Book for Children Aged 6 and Under:
Funniest Book for Children Aged 7 to 14 Years: