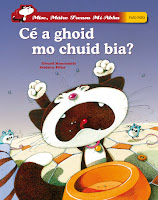 On Monday, 23rd April, Dubray Books' Galway branch played host to the launch of a new series of chapter books as gaeilge by those wonderful publishers Futa Fata (located in Spiddal!) The first two in the series Mise Maire Treasa Mi-Abha have been translated from French; written by Gerard Moncomble, illustrated by Frederic Pillot and translated by Patricia Mac Eoin.
The launch of Sin Bronntanas Seafóideach! and Cé a Ghoid mo Chuid Bia was shared with the third class students from Gaelscoil Dara, Renmore.  And as the pictures below show you, it was a fantastic morning... with readings, discussions on translation (numerous of the books in Futa Fatas catalogue have been translated into other languages incuding Spanish, Chinese, Japanese, Korean and Scots Gaelic) and a bit of a quiz culminating with several lucky children winning books from the entire range offered by Futa Fata.
http://www.futafata.ie/index.php 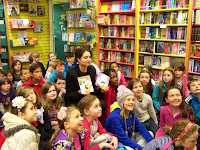 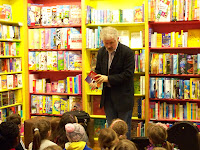 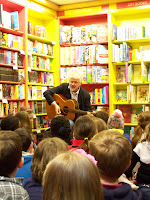