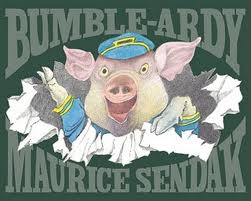 Today's Guardian features an article on children's picture book author Maurice Sendak speaking to the New York Times, in which he states emphatically that today's children's books (and I'm sure we're talking about books for young children) "aren't wild enough." Children's books are too safe and "are not always truthful or faithful to what's going on with children," says Sendak. In many ways, I think he may be right. In recommending his own book, Where The Wild Things Are' to parents for their children, I am frequently greeted with the response ,'On no. I don't want to frighten the child. S/He'd be too sensitive for that,' leaving me with the distinct impression that it mat actually be the adult that's worried. Too often we are lulled into a belief that a book that expresses wildness or danger or rebellion will frighten children, or more dangerously, 'give them ideas.' Those frightening thoughts, those worries or ideas are already there. Picture books, books in general give children a safe and protected environment to voice their fears, their concerns and to see these concerns played out in a way that the child understands and can consume. It has been stated quite often that the point of fairytales was not the 'happily ever after', but the opportunity to see danger, to view the dark side and allow an understanding of the world through fantasy. Believe it or not, children do understand the difference between fantasy and reality. And Sendak's books are among the best at relating these things to children. The last paragraph from the article relates it's conclusion better than I ever could:
"And despite the dangers and the terrors that inhabit his books, Sendak said he had never received a letter from a child which said "Go to hell". Instead, "they are always thanking me for opening the door, even if it was only peeking through to show how difficult life could be", he said. "What I do as best I can is out of a deep respect for children, for how difficult their world is. Yes, there have to be places for safe wonderful stories. It's a big world; it's a big profession. But there should still be crazy people like me and Tomi [Ungerer] left."
http://www.guardian.co.uk/books/2011/sep/19/childrens-books-not-wild-maurice-sendak

Here's also the link to the New York Times article 'On The Phone With Maurice Sendak':
http://artsbeat.blogs.nytimes.com/2011/09/16/on-the-phone-with-maurice-sendak/
Bumble Ardy, the story of a young pig who's never had a birthday party and is left unsupervised as he undertakes his own wild masquerade party is Sendak's first picture book since 'Outside Over There' in 1981.  Sendak is the winner of numerous prestigious awards for this picturebooks, including the Caldecott Medal for 'Where The Wild Things Are', the Astrid Lindgren Memorial Prize, the Laura Ingalls Wilder award, and the Hans Christian Andersen award. Bumble Ardy will be released on 29 September.