Launch of Genesis by Eilis Barrett 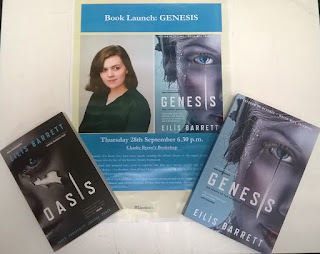 A week ago, I played a small part of the launch of Genesis, the much-anticipated sequel to Oasis by Eilis Barrett; this time at Charlie Byrnes Bookshop in Galway.
Eilis is a remarkable young woman, as you might imagine since she is 18 years old and this is her second book. (Oasis was published when she was 16.) Articulate and accomplished, it is a real privilege to know her, to hear her speak and to read her writing.
Genesis
author: Eilis Barrett
publisher: Gill Books (8 September 2017
ISBN: 9780717174355 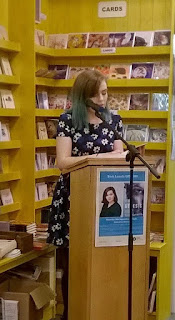 Genesis picks up the story of Quincy Emerson. She now finds herself a captive once again, in the maximum-security prison, the Colosseum as a security risk. Held in deplorable and brutal conditions in the prison, where anarchy rules and rival gangs wage a 'street war' of sorts, Quincy takes care to not make an enemy of either gang boss, while holding allegiance to no one but herself and her comrades on the outside. Food is scarce and delivered infrequently; sleep is a rare luxury and escape from the Colosseum is impossible. But outside, a fatal storm is brewing and Quincy has no choice but to try. 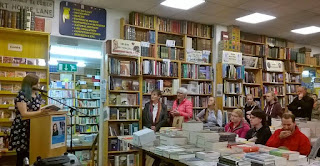 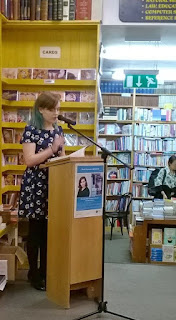 Fast-paced, edgy and head-and-shoulders above the vast majority of YA dystopian fiction, Genesis has the same relentless, intense pace found in Oasis. From page one, the reader is sucked into the story, to be spat out at the end (in the best way.) The world created here is consistent throughout and thoroughly believable. Her characters; no nonsense and forth-right. And the conclusion is one of those rare things in that it is both inevitable, but unpredictable. It is an incredible read.  But please do read Oasis first.(14 yrs +)

Congratulations, Eilis! I can't wait to see what you come up with next.
(p.s. You can find my review of Oasis on the Irish Books, Authors and Publishers page of this blog.)