- February 25, 2013
Little Island has just release THREE new books and they are fantastic! Having just read them all, I am currently working on the reviews, so you'll find them up shortly on the Irish Authors and Publishers page, but here's a quick glimpse: 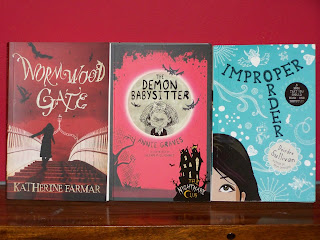 The Wormwood Gate by Katherine Farmar:
Julie and Aisling have never gotten on. When they are bickering one evening after leaving a party, the pair are nearly run down by a strange white horse with a red mane. Upon picking themselves up off the pavement, they find themselves in unfamiliar territory. The entire city seems changed.  A merhorse speaks to them of strange events. Three castles for three Queens of the City blaze on the horizon... and they are captured by seagulls and held captive in the Tower of Light. Will they ever find the Wormwood Gate and get back to the Dublin they know?
The Nightmare Club: The Demon Babysitter by 'Annie Graves'
Annie Graves and 'friends' are back with another creepy tale from the Nightmare Club. What would you do if you discovered your babysitter was an actual demon?
Improper Order by Deirdre Sullivan
Another great story from the world of Primrose Leary. Can Prim solve the problems of love, friendship.... and living with her not-at-all cool Dad, Fintan? Written with great humour and brilliant characters.