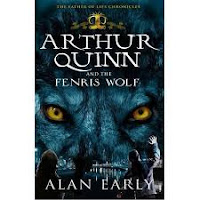 "Life is finally back to normal for Arthur Quinn. Three months ago, he and his friends put their lives at risk to stop the trickster god Loki from taking over the world. However, just when Arthur is starting to relax again, the dreams start once more; dreams of gods, dreams of war, dreams of wolves. It can mean only one thing. Loki is back."
Look for it this September... I've had a sneak preview of the proof. It is great!!! (Review coming soon.) And if you haven't read Arthur Quinn and the World Serpent.... what are you waiting for?!?
http://arthurquinn.ie/
http://arthurquinn.ie/blog/2012/05/introducing-arthur-quinn-and-the-fenris-wolf/