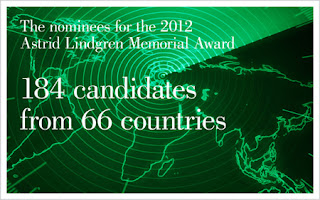 There has been an increase in the number of candidates nominated for the 2012 Astrid Lindgren Memorial Award. One of the most prestigious awards in children's literature, there are now 184 candidates representing 66 countries around the globe. While the jury will well and truly have their work cut out for them with so many candidates, Larry Lempert, chairman of the jury has said;
"It’s very gratifying that the number of nominated candidates and countries represented continue to increase ..... The jury is full of enthusiasm for the exciting and difficult task to consider the work of so many qualified candidates."
And perhaps most exciting of all for us, three candidates from Ireland have joined a list of eminent names from all over the world. Conor Kostick, author of the brilliant, exciting and unique Avatar Chronicles (among others), Siobhan Parkinson, whose works include Bruised, Something Invisible, Four Kids Three Cats Two Cows and One Witch (Maybe); as well as being the driving force behind Little Island and our own very first Children's Laureate and Ireland's greatest living storyteller - seanchai Eddie Lenihan are listed along side the likes of Eric Carle, David Almod, Eva Eriksson, Michael Rosen, Jan Pienkowski... and many, many more. Great company to be in!!! Congratulations to all.
The Astrid Lindgren Memorial Award is presented to authors, illustrators, storytellers and those active in reading promotion. It is a worldwide event and is presented annually. 2012 will mark the 10th annual Astrid Lindren Memorial Award. The latest list of candidates was revealed at the Frankfurt Book Fair on 13th October. The winner will be announced on 20th March, 2012.
http://www.alma.se/en/
http://www.alma.se/en/Nominations/Candidates/2012/
Astrid Lindgren Prize