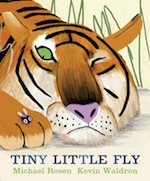 Booktrust has announced it's choice for the Best New Illustrators Awards for 2011. The list of ten is impressive, indeed, and includes our own Chris Haughton ('A Bit Lost') and Kevin Waldron ('Tiny Little Fly' and 'The Owl and the Pussycat'). The awards were presented in a ceremony in London on 22nd March, and were presented by children's author/illustrator extraordinaire Lauren Child of Charlie and Lola fame (among many, many others). The judging panel was comprised of Child, Anthony Browne (the current UK children's laureate), author/illustrator Ken Wilson-Max, Antonia Byatt (director of literature strategy at the Arts Council England) and founder of the Illustration Cupboard John Huddy.
In speaking of the judging panel for 2011, Anthony Browne stated...
"....In the judging meeting colour popped out at us, detail begged to be pored over, wonderful characters bounded through the pages and words and pictures left enough imagination fuelling gaps in meaning to make us want to instantly revisit them! When we had finally reached our decision we were left with a palpable sense that these 10 are the illustration stars of the future.”
http://www.thebookseller.com/news/ten-picked-booktrust-best-new-illustrators-2011.html
Booktrust Best New Illustrators awards 2011