'Of Thee I Sing' by Barack Obama 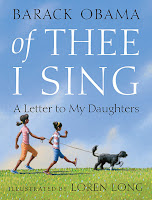 For a while now, we have been anxiously anticipating the release of Barack Obama's children's picturebook, Of Thee I Sing: A Letter To My Daughters, and it has now hit the shops as of the 16th (November). Of Thee I Sing... was written (before he became US President) as a letter to his two young daughters, Sasha and Malia, who feature through the story and is dedicated to his wife, Michelle. A word of caution, this book is very, very, very US centred. But that in and of itself does nothing to detract from the sentiment of the book. While it features only historical figures from United States history, reminding his daughters of the significant role each figure played in the development of the nation, the focus is not so much on specific US events in history as it is the qualities these people represent... courage, justice, strength, belief in oneself and in others and the ability to create change in themselves and others surrounding them. It may noy sell as well over here as it will in the States, but it is a worthy picture book with beautiful illustrations. Quite frankly, I like it.