There's been a lot of activity in the Children's Literature Prize area lately. With dates looming closer, the shortlists have been announced.
First for the Guardian Children's Fiction Prize to be announced on 8th October; the shortlist is
1) Ghost Hunter by Michelle Paver. This is the sixth and final book in the amazing Chronicles of Ancient Darkness series. Beginning with Wolf Brother, this series follows the life of Torak, orphaned and ostracised from his clan in a land 6000 years ago. It has been consistently brilliant throughout, and the last book was gripping and enthralling.
2) Unhooking The Moon by Gregory Hughes is an extraordinary story tracing the journey of two orphans, 10 year old 'Rat' and her brother, Bob, as they hitch a lift from Winnipeg, Ontario to New York in search of their uncle, knowing only his name and that he is a 'drug-dealer'.
3)Now by Morris Gleitzman is the third book in his series centred around the Holocaust and conclues the story of childhood friends, Felix and Zelda. Felix is now a very old man and his granddaughter, Zelda (named for his old and treasured friend) shows unique bravery and stamina in standing up to school bullying and dealing with terrifying forest fires.
4) The Ogre of Oglefort by Eva Ibbotson offers some relief ffrom the highly serious subject matters of the others, while maintaining the highest standards of writing and story-telling. Four unusual companions set out to rescue a princess from an ogre, who is not at all what he seems. But then, the princess is something of a surprise, as well.
http://www.guardian.co.uk/books/2010/sep/17/guardian-children-fiction-prize
The Booktrust Teenage Prize 2010 has also just announced it's shortlist of six books, with the prize to be announced on 1 November 2010. The nominees are:
1)Halo by Zizou Corder
2)The Enemy by Charlie Higson
3)Unhooking The Moon by Gregory Hughes
4)Nobody's Girl by Sarah Manning
5)Revolver by Marcus Sedgewick
6) Out of Shadows by Jason Wallace
http://www.booktrust.org.uk/show/feature/Home/Booktrust-Teenage-Prize-2010-shortlist
And one final mention for the Roald Dahl Funny Prize. There are two shortlists involved here, so for the sake of blog space, I'll just give you a few of my favourites and the link to the site. 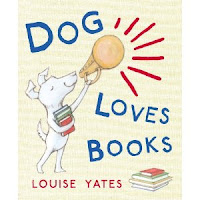 For the Funniest Book for ages 6 and under:  I really love the wonderful picture book Dog Loves Books by Louise Yates. (My review for this one is one my Picturebooks page.) Also, One Smart Fish by the magnificent author/illustrator Chris Wormell.
In the Funniest Book for Children Aged Seven to Fourteen Years (quite an age range there): I really love the Clumies Make A Mess by  Sorrel Anderson (My review for this is on the What Ae You Reading page.) And here's the link.....
http://www.booktrust.org.uk/show/feature/Home/Roald-Dahl-Funny-Prize-2010
Booktrust Teenage Prize Guardian Children's Fiction Prize Roald Dahl Funny Prize