Last week, I ventured down to O'Mahony's Bookshop in Limerick for the launch of a truly phenomenal new book by Sarah Moore Fitzgerald; A Strange Kind of Brave.
This is Sarahs' fifth book for young people and she simply goes from strength to strength. Her books all deal with children facing some of the biggest challenges imaginable and finding the inner resources to meet them head on. While engaging with some heavy issues, she manages to communicate the stories with humour, imagination and a deeply effective light shining through the dark, making each one not only gripping, but a delight to read; the kind of books that young people will pick up and not want to put down.

A Strange Kind of Brave is certainly no exception; it's utterly consuming. It will strike a chord and continue to vibrate through the reader long after they have finished the book causing it to be one of those that will be read repeatedly. A Strange Kind of Brave not only tells a deeply fascinating story, taking the reader completely away to the small town of its' setting; but it sends a powerful message and inspires one to seek out your own inner strength, to be unafraid to do what must be done and to understand that your past need not define you.

I had asked Sarah if she would mind answering some questions about the book and its' journey. Let's see what she had to say:

I want to start with a question that I am frequently asked about books for children/young adults. In your books, as in many, many others, a number of devices appear that remove the adult influences from the young peoples’ lives. In this book, Allie’s mother died of cancer years before; in The List of Real Things, both parents were dead and in others, the adults are not very effective. Why do you think this occurs so frequently in childrens books? How important is it in the crafting of the story?
It’s absolutely true that practically all of the parents in my stories are dead, or absent or ineffective or troubled in some fundamental way. For me, all of the best children’s stories are those that involve children having adventures on their own, facing challenges, confronting enemies and making decisions by themselves. Children often fear the loss of their parents in real life, and fiction is a great way for them safely to work through those fears and imagine themselves surviving even under the worst of circumstances.
-For me, from the very beginning this was a very intense, emotional novel to read. And while there were lovely, affirming points that kept me going through the tension, it never let up. I was wondering what it was like for you, as the author to write this; to keep building the tension? And how do you feel it works for young readers?
A Strange Kind of Brave is the sort of story that needs to contain constant and rising tension. It was exhausting to write! It took me a good while to get it the way I wanted it to be. Though the conflict does rise very intensely,  I hope there are also enough light moments to balance those darker parts of the narrative.
-Jake McCormack is such an overwhelming villain; so powerful with all that power built on pure fear. One wonders how a town full of people could allow his sway to go as far as it does? What is it about people that will let this kind of bully, to use the word, take over so completely and begin to spread into the younger generation?  And are you saying something about the state of the world today in general with the type of leaders we have and the issues that are currently influencing us all?
Yes! Exactly! I think our world has seen a wave of political leadership that exercises power through fear and subjugation and in many ways I think Jake McCormack is a fictional version of this, and the story shows what happens when someone finally decides to stand up to him.
-Allie and Luca shine forth as real ‘heroes’ in the end, though you can see the effects of past events in their lives and the fears that grow over time. Where, in the end and as children, did the strength and courage they have to take a stand against Jake come from; especially as all the adults seem unable to do anything to affect real change?
Allie and Luca summon the courage to take a stand against Jake because they begin to see that not standing up to him will end up costing more. They can see what the adults have forgotten. It’s more important to be true to yourself and to be free from exploitation than it is to live under the shadow of such a dark power.

-Without giving away any spoilers (it really must be read!) the twist in the story has such an impact, so full of shock and betrayal and it comes forth with such an incredible voice. I’m afraid I still don’t have an intelligent question about it, but could you say something about executing such a finely crafted idea? Was this an idea you had from the start or did it grow with the story? Were you concerned about creating this kind of a twist and the effect it would have? (Frankly, I’m still reeling from it.)
It’s so wonderful to know that this part of the plot has paid off. It did take a lot of thinking through to get it just right and to ensure that it would have the impact that I wanted it to. I had amazing help from my editor Helen Thomas who was the second set of eyes to make sure the pace and the reveal worked as well as they could. I do very little planning in advance of writing my books so for me all the twists and turns in a plot emerge as the story unfolds.
-Throughout the story, food and its magnificent magic to bring joy and community runs like a refreshing stream of goodness in the worst of circumstances that echoes the power of love to overcome. Please say something about this.
I’ve always been fascinated by the role of food in stories. Some of my all time favourite stories – (including The Magic Porridge Pot; Charlie and the Chocolate Factory; The Particular Sadness of Lemon Cake and Chocolat ) seem to have food playing a central role. My second novel The Apple Tart of Hope, has at its heart the idea that beautiful food, made well and carefully can have healing effects. And so it is with this story too. In A Strange Kind of Brave, the gorgeous food Ariana makes and the ritual of meal times become ways of rescuing the town of Clanfedden.
Thank you for taking the time to answer these.
Thank you so much for the great questions! 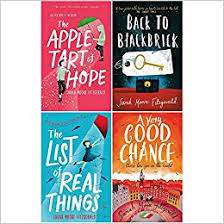 You can find my full review of A Strange Kind of Brave on the Irish Books, Authors and Publishers page of this blog. But for real proof of how brilliant, insightful and gripping this story really is, you should read it yourself.
Also read Sarahs' other books; Black to Blackbrick, The Apple Tart of Hope, A Very Good Chance, and The List of Real Things. Each quite different; each absolutely stunning.