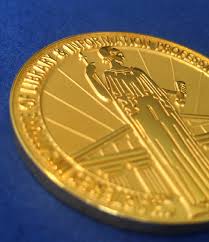 The winners of the CILIP Carnegie and Kate Greenaway Medals for 2018 were announced earlier today at a ceremony in The British Library in London. Widely regarded as being the most prestigious awards to be given to writers and illustrators working in children's' literature, this award is unique in that they are judged by librarians.

Geraldine McCaughrean has won her second CILIP Carnegie Medal, thirty years after her first. Where the World Ends, her winning title, dramatically explores the destiny of a collection men and boys stranded on a remote and inhospitable sea stac when their rescue boat fails to collect them and was inspired by an 18th century historical record from St Kilda. In her acceptance speech, McCaughrean voiced concerns about the 'dumming down' of children's literature and petitioned writers to challenge their young readers by presenting them with a vocabulary (in their writing) that demands exploration and allows children to think for themselves. 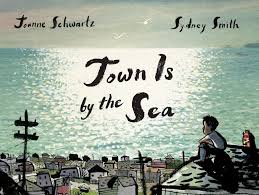 Town Is By The Sea gifted Sydney Smith with his Kate Greenaway Medal. With exquisite, atmospheric illustrations, Smith depicts a wondrous and intimate tale of a young boy contrasting the vibrant and beautiful seaside day with the stark and dreary world of the mines that lie beneath. In the response to his book, Smith discovered that this was a tale that had vibrations across the planet, though the story itself was very specific to time and place.
Smith said;  "Although this story is specific to a place and a time, the context of childhood is universal. There is something so beautiful about the universality of the complicated richness of youth..."
McCaughrean and Smith each received £500 worth of books to donate to a library of their choice, a £5000 cash prize from the Colin Mears award and a specially commissioned gold medal.
The Amnesty CILIP Honour commendations this year both had very strong themes of empowering children and young people to stand up for their beliefs and show courage and determination in shaping the world around them.

Angie Thomas received her Amnesty Carnegie Honour commendation for The Hate U Give, a powerful YA novel that tells the story of 16-year-old Star following the shooting of her best friend by a white police officer. Inspired by the Black Lives Matters movement, it projects a strong and truthful voice in depicting a horrific circumstance faced by far too many young people today. 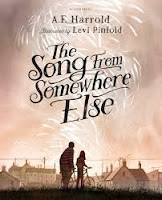 The Amnesty Kate Greenaway Honour commendation for illustration was given to Levi Pinfold for his work in A Song From Somewhere Else. This book explores themes of acceptance, friendship, betrayal and standing up for what is right. The illustrations portray the importance of kindness and generosity of spirit, particularly toward those who see the world from the shadows.
In my view, all the winners of this years CILIP awards show a trend; an opening of  vision  in childrens literature toward a more considered and at times, challenging world view that quite appropriately call young people to really look at the world around them. Events today can allow the young to feel more vulnerable, confused and isolated. Books such as these offer respite, comfort but, even more to the point, choice, determination and empowerment.
Congratulations to all the winners. And to all you readers out there, if you are looking for recommendations; these.
http://www.carnegiegreenaway.org.uk/press.php?release=pres_2018_winners_announcement.html