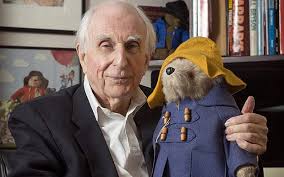 It is with great sorrow that I heard the news of Michael Bonds' passing today.
Michael Bond was, of course, the creator of the beloved Paddington Bear. The first book, A Bear Called Paddington was first published in 1958. It introduced the world to Paddington Bear, so called because he was found at Paddington Station after having made his way from deepest, darkest Peru stowed away on a ship with a suitcase full of marmalade sandwiches. A Bear Called Paddington, along with the numerous sequels, chronicles the life Paddington is now adjusting to in contemporary London; adopted by the Browns', trying to understand how everything works and causing chaos, while frequently saving the day at the same time. Gentle, poignant, observant and all too human, Paddington stands among the great fictional characters of our time.

Bonds' books went on to introduce other characters; Olga da Polga, that marvelous, funny guinea pig who has left the pet shop to start her new life with her human owners;the tales of those classic crime-fighters, Monsieur Pamplemousse and his faithful bloodhound, Pomme Frites and many, many others.
While Bond lived to the splendid age of 91; and a life well-lived, indeed; his presence in this world will be sorely missed. Kind, gentlemanly and utterly charming, there are few that could stand in his shoes. I am ever so grateful for his gift of Paddington Bear, which allows him to live on in our hearts.
RIP,  Michael Bond....dear afterlife, please look after this gentle, wonderful author.