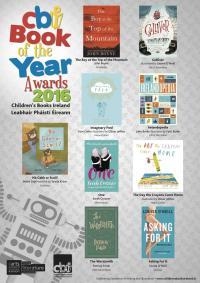 The winners of this years' CBI Awards were announced today at a ceremony held in Smock Alley Theatre in Dublin. 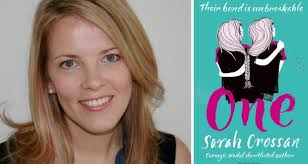 The 26th award for CBI Book of the Year 2016 went to Sarah Crossan for her amazing YA novel One, which chronicles a year in the life of conjoined twins, Grace and Tippi. Placed under constant medical and psychological evaluation and homeschooled until the age of 16, they now have to attend school for the first time in their lives. Written in verse, this is an insightful look at difference, acceptance, individuality and friendship. One was also given the Childrens Choice Award, presented to Crossan by students of Kings Hospital School Palmerstown and St Brigids National School Glasnevin. This makes Crossan the fourth author to win both.
(The Childrens Choice Award is by far my favourite as it voted for by young readers across Ireland!)
There are 4 other awards given at the Book of the Year ceremony. And the winners are:
Lauren O'Neill, receiving the Honour award for Illustration with her brilliant and beautiful work on the adaption , Gulliver; an intriguing and spell-binding adaptation, retold by the late Mary Webb and published by O'Brien Press. Great job and congratulations!
The Honour Award for Fiction went to Louise O'Neill for her second YA novel, Asking For It, which deals with the difficult but urgently important issues of consent, blame and victimisation.
Both the Judges Special Award and the Eilís Dillon Award (for a first childrens' book) went to the father/daughter team of John and Fatti Burke for Irelandopedia, an encyclopedia of facts and information about Ireland, suited for children of all ages!
From Jenny Murray, acting director of CBI;

"The Children’s Books Ireland Awards are the most unique children’s book awards in the country, allowing us not only to honour the very best in Irish writing, illustration and publishing, but to give young people a voice through the Children’s Choice Award. We were delighted to see a large increase in the number of young readers taking part in our shadowing scheme this year and enjoying the books on this year’s shortlist, across genre and age group."

....which is exactly why I am so proud to be associated with CBI.
Congratulations to all this years' winners.
http://www.childrensbooksireland.ie/
http://www.thebookseller.com/news/sarah-crossan-scoops-irelands-26th-cbi-book-year-award-330277