The Branford Boase Award shortlist for 2016 was announced recently, but before I show you the list, let me just recap as to what the award is all about.
The Branford Boase award is considered one of the pivotal awards in childrens literature. It is awarded annually to the author and editor of an outstanding debut novel for young people. and has a hugely impressive track record in identifying those with a special talent at the very start of their career. For example, Meg Rosoff, winner of this years' Astrid Lindgren Memorial Prize (considered the worlds' most noted prize in childrens' books) one the Branford Boase Award for her first novel, How I Live Now in 2005. Frances Hardinge was named the Branford Boase winner exactly 10 years ago, and has gone on to win many accolades, including being named as the overall winner of the Costa Book of the Year Award this year for her incredible, The Lie Tree. I could go on and on, but basically, if you are even listed for the Branford Boase award, you are an author/editor who will attract a lot of attention.
This years' longlist of 23 authors and their editors has been whittled down to 6. From this, the judges will select "the most promising book for 7-year-olds and upwards by a first-time novelist."
And the shortlist is: 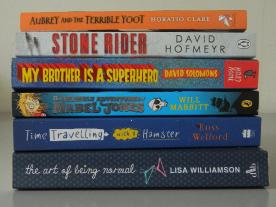 This is an incredibly strong shortlist. (Well, they do keep getting stronger and stronger with each passing year.) The best of wishes to you all!
http://www.branfordboaseaward.org.uk/BBA_Current/BBAshortlist.html