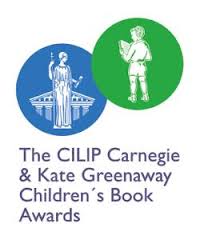 As you may already know, the long lists for the prestigious CILIP Carnegie and Kate Greenaway Medals 2013 have been released. These are indeed VERY long lists, so I won't recite them in their entirety here. But I will point out a few of my favourites and leave you with the link, so you can peruse them for yourselves at your leisure.
The CILIP Carnegie Medal was first established in 1936 and named in memory of Andrew Carnegie, who accredited his great success to his use of libraries as a child. Those early experiences led him to resolve:

"if ever wealth came to me that it should be used to establish free libraries."
Wisdom, indeed.
The CILIP Carnegie medal long list for 2013 includes some outstanding efforts by the best children's authors working today. A particular favourite of mine is Sally Gardner. Sally has two books on the long list; her new book Maggot Moon and the incredible and amazing The Double Shadow. Accompanying these two brilliant books are the equally astounding A Face Like Glass by Frances Hardinge, All Fall Down by Sally Nicholls, Wonder by RJ Palacio, The Apothecary by Maile Melloy, After by Morris Gleitzman, Gods and Warriors by Michelle Paver and, from our own Derek Landy, Skulduggery Pleasant: Death Bringer. There are many others on the list... and all are worthy contestants.
The Kate Greenaway Medal was first established in 1955. Named after the 19th century illustrator known for her beautiful illustrations and designs, it is awarded annually for an outstanding book in terms of illustration for children and young people.  Some of the representatives on the 2013 long list include:  North: The Greatest Animal Journey on Earth by Patrick Benson (illustrator) and Nick Dowson, The Pirates Next Door by Jonny Duddle, This Moose Belongs to Me by Oliver Jeffers,
The Cat and the Fiddle: A Treasury of Nursery Rhymes by Jackie Morris, Claude at the Circus by Alex T. Smith, Croc and Bird by Alexis Deacon... and many, many more.
I am soooo delighted that I am not responsible for making such a choice. Here's the link:
http://www.carnegiegreenaway.org.uk/pressdesk/press.php?release=pres_2013_longlist.html