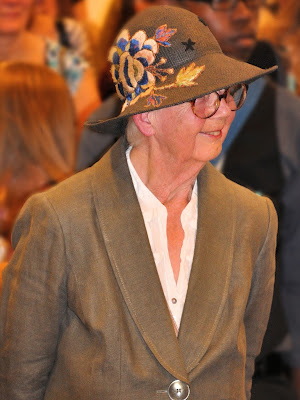 In an interruption to my regular posts of journeys in books for this strange summer holiday season, I have to take a moment to celebrate probably the most iconic book illustrator/author working in the world of childrens literature today:

A VERY HAPPY BIRTHDAY, SHIRLEY HUGHES!!!
Born on 16th July, 1927, Shirley Hughes has written more than 50 books and illustrated over 200 books, which have sold more than 11.5 million copies worldwide. (You would be hard-pressed to say that you have never seen her work.)
In 1997 (for Dogger) and again in 2003 (for Ellas' Big Chance, her own interpretation of Cinderella), Shirley Hughes won the Kate Greenaway Medals for Childrens Book Illustration. In 2015, she won the inaugural lifetime achievement award from Booktrust. 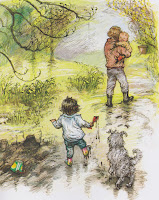 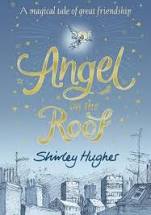 Her illustrations are timeless and heartwarming, capturing glimpses and moments of life in a style that is instantly recognisable; uniquely her own.
While best known for her illustrations; she began in the 1950s-1960s by illustrating the work of other authors, such as the My Naughty Little Sister books by Dorothy Edwards and The Bell Family by Noel Streatfeild. The first book she both wrote and illustrated was Lucy & Toms Day, which went on to be a series of stories. She continued her own work with the Ollie and Me series (1993), Dogger (1977) and the Alfie series (1997), becoming one of the most sought after childrens illustrator/author of our times. In 2012, Hughes published her first childrens novel, Hero on a Bike, giving us a WW2 adventure that proves the extraordinary things people can do in extraordinary circumstances...and it is a gem. Still working at the age of 93, her most recent book, Angel on the Roof was published in October of last year.
A Life Drawing, published in 2002, chronicles her lifes' work from childhood through to her many achievements and is both heartfelt and inspiring.
Again, a very Happy Birthday, Shirley Hughes and thank you so very much for the gift of your stories and pictures.