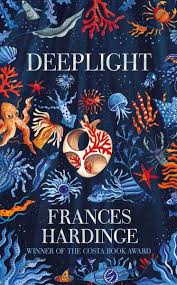 Frances Hardinge is one of my top three favourite contemporary authors. She has the talent of being an incredible, riveting storyteller which is always combined with lyrical writing and world-building that is so absorbing that it pulls her readers directly into these improbable, but totally believable spaces.
Her latest book, DEEPLIGHT was released recently; on Halloween, in fact. An utterly appropriate day to introduce the world to a vibrant and vibrating ocean full of the sea gods of the Myriad; we are literally pulled into the depths of these horrifying monsters seducing their way back into existence. It is breath-taking.
(full review on the Young Adult page.)

But let us take a look at her other books, books that, if given the chance I will gush about for hours at a time. I don't want to do that here, so I'll be as brief as a can...I'll give you my top three Frances Hardinge books (and a glance at all the others.) 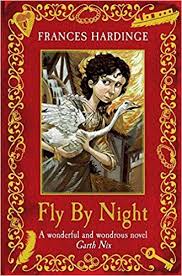 I first came across Frances Hardinge in 2006 with her first book, FLY BY NIGHT, and was immediately transfixed by it. An alternative historical fiction, we are transported back into a time when a country, England I suppose, has been taken over by the Guilds and is now known as "The Fractured Realm". In this world we meet Mosca Mye, a young orphan girl living with her Aunt and Uncle in their mill. As her unique talents of reading and writing are forbidden, she has been kept basically hidden while she works at keeping their accounts until one fateful night. In an act of accidental arson, Mosca burns the mill down. Now on the run with Saracen, her homicidal goose companion, Mosca takes flight with traveling wordsmith and a conman of ill-repute, Eponymous Clent. While Clent is constantly attempting to lose Mosca (and rid himself of Saracen as an added bonus), they head for Mandelion, in hopes of finding a school for Mosca and whatever wealth the world may lay at the door for Clent.
Filled with wonder, imagination, drama and delight, it is still my absolute favourite. I've read it numerous times over the years and it never ceases to give me such joy and adventure. 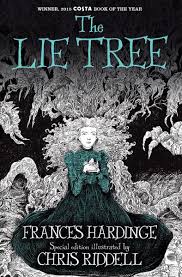 Number two on my list of Frances Hardinge favourites has to be THE LIE TREE, which  tells the story of Faith Sunderly, whose family has moved to a small, dismal island for her fathers' research...and, unbeknownst to Faith, to escape a scandal about to be revealed that would disgrace her father and the entire family. When Faiths' father is found dead under mysterious circumstances, Faith embarks on a journey to uncover the truth. Part historical fiction, part murder mystery, part magical realism, not only did it win the Costa Childrens Prize in 2016, but went on to win the overall Costa Book of the Year Award 2016; quite a feat for a childrens' book! It is simply mesmerising!
And you may want to give yourself a real gift; get the illustrated edition with evocative, atmospheric illustrations by Chris Riddell...you treasure it forever! 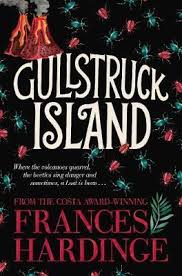 And finally, number three. GULLSTRUCK ISLAND was published in 2009. It carries me away to an island of quarrelsome volcanoes, singing 'blissing' beetles and the birth of an occasional Lost. Arilou is one of the Lost, a child with the ability to depart her body and mind-fly on the winds. Her sister, Hathin is her minder and helper. But together, they hide a terrible secret; one that must never be uncovered or it risks everything. Then tragic events unfold and threaten to expose the secret. With a warrior/protector by their side and a blue-skinned hunter tracking them down, Arilou and Hathin must escape. For it is them that will decide the future of Gullstruck. Crackin' adventure on a supposed idyllic tropical island and an incredible heroine...and I simply can't resist the volcanoes. Just love it!

Although, (and here is where I run the risk of going on indefinitely), you can't go wrong with any of the nine books Frances Hardinge has in her canon. Each one marvelous, beautifully written and so imaginative. Each on is also unique from the others; different worlds, different concerns. (Apart from Twilight Robbery, the sequel to Fly By Night.)
My advice is read them all! 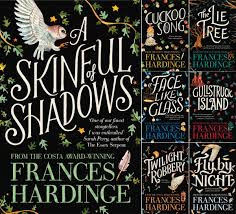