The Life and Loves of E Nesbit by Eleanor Fitzsimons 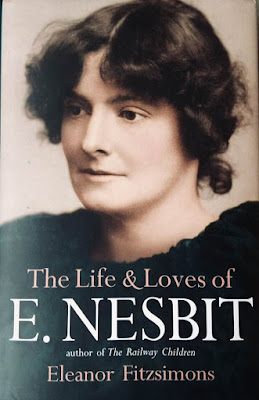 It has been over thirty years since a biography has appeared about the Victorian/Edwardian childrens' author, E. Nesbit. And now emerges an exceptional biography; one that will fascinate and delight those of us who have grown up (and passed along to young readers) such wondrous books as The Railway Children, The Phoenix and the Carpet, The Story of the Amulet and (my personal favourite) Five Children and It.

Edith Nesbit is known and loved as the creator of so many classic childrens' books. In fact, it has been said (with exceptional evidence) that she was the mother of modern childrens' literature and certainly the inventor of the childrens' adventure story format. These books have stood apart from her other writing in her long, prolific career and have stood the test of time as children today still revel in the exploits and personalities of her characters. But this book not only focuses on her reputation as an iconic childrens' author, but explores deeply her unusual, controversial life, her social and political outlook and the impact she had on all of those around her and those pivotal authors who came after her. 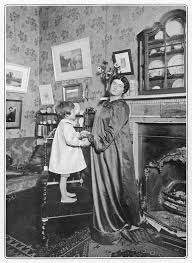 By her own admission, Edith was a sensitive, anxious child who had been deeply distraught by the early death of her father, her sisters' illness and an overwhelming, for her, amount of family upheaval. She developed a vivid imagination which she began expressing through poetry at the age of eleven. The book begins by relating a childhood incident where she was taken to the belltower at the church of Saint Michel in Bordeaux, filled with 'delicious anticipation' at the prospects of viewing the mummies there. What she left with was a haunting, horrified memory of desicated corpses, 'weirdly intact' and arranged upright along the walls. This is a vision that haunted her, firing her imagination and completely terrifying her. Edith recounted the incident later, in a series of articles written in the  Girls' Own Paper when she was about 38 years of age. It seems it is this moment when she decided to begin to write for children, as previously she was known as a poet and essayist. Her life and outlook had already begun to change dramatically upon her marriage to Hubert Bland. Seven months pregnant at the time, she entered into this lifelong union with Bland, a serial womaniser with sexist tendencies and Edith found she had to muster up a great deal of strength, fortitude and determination to keep their home intact. Particularly when Bland fell ill with smallpox shortly after their marriage and lost his business. While Blands' fortunes would ebb and flow throughout their life together, it was Edith who kept things going. Theirs was an unorthodox marriage with Edith turning a blind eye to his rabid philandering and even raising Blands' children by her friend and their governess as her own. Edith had a number of romantic entanglements of her own, including George Bernard Shaw, with whom she fell deeply in love. Together, the Blands were founding members of the Fabian Society. Edith was a staunch socialist,campaigning tirelessly to alleviate poverty and improve educational opportunities for the poor, working class. Their home was full of literary luminaries of the time and she was generous and honest in the assistance she gave to emerging authors. She surrounded herself with young people and her door was always open to those who wanted to join in the chaos and comfort of the Bland household. Though in a contradictory socio-political stance, her opinion of the Womens' Suffrage movement was not enthusiastic or supportive. Edith even gave a lecture containing views so shocking regarding the matter that it was stricken from the publications of the Womens' Fabian group. It seems that life as Edith Nesbit was always one of great drama that she reveled in; great generosity and adventures both marvelous and turbulent. The impression one is left with is one of contradiction...but fabulous contradiction. 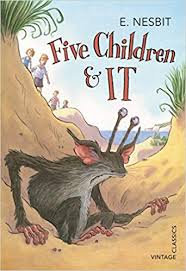 Fitzsimons infuses this biography with much archival and anecdotal evidence, which paints an exacting and intriguing picture. Letters, poetry, excerpts from her writing and from various memoirs all support a deeper view into the mindset of this extraordinary woman. And upon rereading a couple of her better known childrens' books, the impact of this life, her opinions and outlook and its' portrayal in the stories becomes subtly clear. Never writing down to children; always addressing them as equals (to the author); Nesbit had a unique way of creating a world of bold, sometimes anarchic, clever children locked in adventures of their own making not for us to merely escape in to, but to understand and have mastery over, then to bring that mastery into real life.Sounds much like the life of Edith Nesbit.
Compelling, well-researched, deeply thought-provoking and incredibly surprising; you will not be let down by this biography of one of the most fascinating figures in childrens' literature. Not only does it lay bare her life for examination, it opens her mind and her heart and gives greater understanding of her writing.
https://www.duckworthbooks.co.uk/book/the-life-and-loves-of-e-nesbit-author-of-the-railway-children/